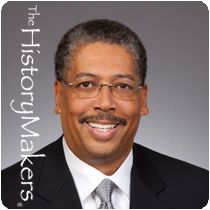 See how Earl Stafford is related to other HistoryMakers
Donate Now

Philanthropist and business executive Earl W. Stafford was born in Mount Holly Township, New Jersey on May 14, 1948 to Mabel (née Willis) and Robert E. Stafford. After graduating from high school, Stafford enrolled in the United States Air Force to become an air traffic controller. He went on to have a distinguished twenty-year career in the U.S. military which included service as the assistant Air Force Liaison Officer to the Federal Aviation Administration. During his time in the Air Force, Stafford enrolled at the University of Massachusetts – Amherst and graduated with a B.S. degree in 1976. He then obtained his M.B.A. degree in business from Southern Illinois University – Edwardsville in 1984. Stafford is also a graduate of the OPM Executive Program at Harvard Business School and holds several honorary doctorate degrees.

In 1988, Stafford founded Universal Systems & Technology, Inc. (UNITECH), a training and information technology company. During his twenty one years as UNITECH’s chairman and chief executive officer, the company accrued millions of dollars in revenue and was recognized as one of the top minority businesses in information technology. In 2009, Stafford sold the company to defense technology corporation Lockheed Martin. Additionally, Stafford founded The Stafford Foundation, a faith-based, philanthropic organization in 2002. The foundation is credited for “The People’s Inaugural Project” initiative, which brought more than 400 disadvantaged and underserved individuals to Washington, D.C. for a three-day celebration of President Barack Obama’s historic inauguration. Two years later, Stafford teamed with actor and comedian Bill Cosby for the Doing Good campaign, a national philanthropic initiative. Stafford is also chief executive officer of The Wentworth Group, LLC, a Reston, Virginia-based holding company providing financial and business support services.

Stafford has garnered numerous honors for his accomplishments in business and the social service sector. He received the “Candle in the Dark” award from Morehouse College in 2012 and the Crystal Stair award at the Uncommon Heights Awards in 2011. In 2010, he was the recipient of the Horatio Alger Award. The Washington, D.C. Chapter of the Association of Fundraising Professionals (AFP/DC) honored Stafford with the Outstanding Philanthropist Award during its National Capital Philanthropy Day celebration in 2009. The Salvation Army of Greater New York honored him with its first "Stand Together" Award during its 62nd Annual Luncheon. Stafford and his foundation were honored by the Tennessee State Legislature, which authored a joint resolution recognizing the efforts of The People’s Inaugural Project in January 2009.

Stafford serves on the Boards of the Horatio Alger Association, the Wesley Theological Seminary, the Apollo Theater Foundation, the National Symphony Orchestra, the Morehouse College Board of Trustees, and the Morehouse College – Andrew Young Center for Global Leadership and Africare. He also received a Presidential appointment to the President’s Board of Advisors on Historically Black Colleges and Universities.

Stafford and his wife Amanda reside in McLean, Virginia.

Earl W. Stafford was interviewed by The HistoryMakers on April 30, 2012.

See how Earl Stafford is related to other HistoryMakers
Donate Now
Click Here To Explore The Archive Today!