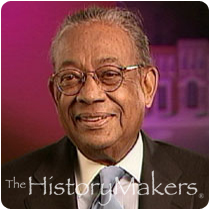 See how Earl Neal is related to other HistoryMakers
Donate Now

For three generations the name Neal has been a benchmark of commitment, integrity and extreme professionalism. Earl Langdon Neal stands as one of the most respected attorneys on the Chicago legal scene. The son of Chicago attorney Earl James Neal, Earl Langdon Neal was born in Chicago on April 16, 1928. He received his B.A. from the University of Illinois in 1949, and his J.D. from Michigan Law School in 1952.

Following his graduation from law school, Neal served briefly in the United States Army. In 1955, he joined his father's law firm, Neal & Neal. Their first trial together took them to Lincoln, Illinois. The two were forced to commute from Chicago because Lincoln, nearly one hundred and seventy miles away, had no hotels that would admit African Americans. In 1960, Neal began working with the Chicago city government. That year Neal was appointed assistant Corporation Counsel and worked closely with the Bureau of Engineering in acquiring land for the Dan Ryan and Kennedy rapid transit extension projects. He also served as trial lawyer for the Land Acquisition Division and the Land Clearance Committee. In 1962, Neal accepted the responsibility as principal of his father's law firm after his father was appointed judge. In 1968, he formed his own firm, Earl L. Neal and Associates and continued to handle trial work for the city of Chicago and other public agencies.

In 1975, Neal was elected President of the University of Illinois Board of Trustees. His election made him the first ever African American trustee in the United States. While serving his twelve-year tenure, he helped to guide debates over issues of minority medical school recruitment and the provision of health services to the surrounding community. He was also instrumental in launching land acquisition and development of the University of Illinois Circle Campus. In 1995, Mayor Richard M. Daley appointed Neal chair of the Chicago/Gary Regional Airport Authority. As chair, Neal concentrated his efforts in support of an economic and strategic solution to the growing aviation transport demands on the region.

Earl Langdon Neal was the recipient of a host of honors and awards, including the Robert S. Abbott Memorial Award; the Justice John Paul Stevens Award; and the Defender of Justice Award. His community work included membership in the Chicago Urban League, the NAACP, and co-chairmanship of the Teachers Academy for Mathematics and Science. He resided in Chicago with his wife, Isobel. Their son, Langdon Neal, is an attorney.

See how Earl Neal is related to other HistoryMakers
Donate Now
Click Here To Explore The Archive Today!