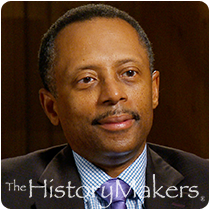 See how Earl Lewis is related to other HistoryMakers
Donate Now

Foundation president, historian and academic administrator Earl Lewis was born in 1955 in Norfolk, Virginia. Lewis attended Concordia College in Moorhead, Minnesota, where he graduated in 1978 with his B.A. degree in history and psychology. After graduating from Concordia College, Lewis enrolled in the University of Minnesota and received his M.A. degree in history in 1981. He then went on to earn his Ph.D. in 1984 from the University of Minnesota.

Lewis has edited, authored or co-authored seven books. They include the 1991 monograph In Their Own Interests: Race, Class, and Power in Twentieth-Century Norfolk, 2000’s To Make Our World Anew: A History of African Americans, 2001’s Love on Trial: An American Scandal in Black and White, and 2004’s The African American Urban Experience: From the Colonial Era to the Present. Lewis is also the author of more than two dozen scholarly articles and has served on several academic and community boards, including the American Historical Review, Council of Graduate Schools, the American Council of Learned Societies, the National Academy of Science’s Board on Higher Education and the Workforce, and the Center for Research Libraries. He became a fellow of the American Academy of Arts and Sciences in 2008.

Earl Lewis was interviewed by The HistoryMakers on October 18, 2013.

See how Earl Lewis is related to other HistoryMakers
Donate Now
Click Here To Explore The Archive Today!