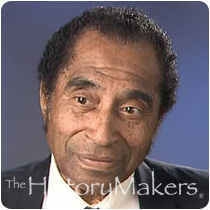 See how Earl Calloway is related to other HistoryMakers

Calloway was best known as both the Fine Arts Editor and a columnist for the Chicago Daily Defender, the nation's last black daily newspaper. Calloway joined the staff of the Defender in September 1963, after working as a writer for the Associated Negro Press, Chicago Courier and Negro Press International. Calloway, a talented singer, performed in operatic productions of "Die Fledermaus," "Carmen," "Aida," "The Ordering of Moses," and Operas of Puccini in cities across the United States.

His contributions to the arts in Chicago were innumerable. Calloway organized the annual Black Esthetic Festival (now called Black Creativity) held at Chicago's Museum of Science and Industry. He founded the Philharmonic Youth Choir and Oratorio Society of Shiloh Seventh Day Adventist Church and served as a soloist with the Umbrian Glee Club and The Artist Circle. Calloway was a co-founder of the Fine Arts Academy and was also influential in helping to establish a musical program for the Children and Adolescent Forum. He received numerous awards, including Kuumba Workshop Media Award, Charles P. Browning Journalism Award and the Cultural Citizens Foundation for the Performing Arts Lifetime Achievement Award.

See how Earl Calloway is related to other HistoryMakers
Click Here To Explore The Archive Today!