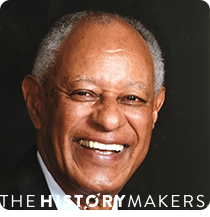 See how E. T. Williams is related to other HistoryMakers
Donate Now

E.T. Williams, CEO of Elnora, Inc., was born Edgar Thomas Williams, Jr., on October 14, 1937, in Brooklyn, New York. His father, Edgar Thomas Williams, Sr., was a real estate and insurance broker and his mother, Elnora Bing Williams Morris, was a homemaker. In the 1940s, Williams attended Elliott School in Brooklyn. During his junior year in high school, he was elected president of the student body, as well as president of the Brooklyn-Staten Island Chapter of the Junior Red Cross. He was also captain of his high school track and fencing teams. Receiving his diploma in 1955 from Eastern District High School, Williams attended Brooklyn College that same year. During college, he served as president of the Brooklyn College Chapter of the NAACP, raised money for the sit-ins in the South, and received the Rheingold Good Neighbor Award for his community service. Williams received his B.A. degree in economics from Brooklyn College in 1960. He received his real estate and insurance license in 1959 to take over his father’s business while his father recovered from an illness.

Williams joined the Experiment of International Living Program in the early 1960s and lived abroad for six months in India. Upon his return to the United States, Williams taught at P.S. 35, a junior high school in Brooklyn, New York. After teaching, he went to work for the Peace Corps as a volunteer in Ethiopia. In 1963, Williams attended the March on Washington, where he stood behind Dr. Martin Luther King, Jr. during his “I Have a Dream” speech. Williams then moved to Washington, D.C., where he continued his work with the Peace Corps for three more years. During his time at the Peace Corps, Williams took classes in business affairs at the Johns Hopkins School of International Studies.

Williams’ professional career in finance began in 1968 when he joined the Maryland National Bank as a banker. In 1969, Williams became the first African American officer of a commercial bank in the State of Maryland. He worked there until 1971 when he returned to New York City, joined Chase Manhattan and began working in institutional banking as a lending officer. Williams left banking in 1982 and returned to real estate as chairman of the board and head of the Fordham Hill Project, the largest eviction co-op conversion in the history of New York City. He retired in 1992 and began Elnora, Inc., a private family investment company. He serves on the Board of Directors of Fiduciary Trust Co. of New York and served as chair of the audit committee for eight years.

Williams is an avid African American art collector. Included in his collection are works of art by Jacob Lawrence, Romare Bearden, and Aaron Douglas. He owns the estate of Hale Woodruff and donated a sizeable portion of it to the Studio Museum in Harlem and other museums. Williams is a member of Sigma Pi Phi, Zeta Chapter of the Boulé; the Comus Club of Brooklyn; the Reveille Club of New York; the Knickerbocker Club and the University Club of the City of New York. He also sits on several museum boards, including the Brooklyn Museum and the Museum of Modern Art (MOMA). Other boards include the NAACP Legal Defense Fund; the Nature Conservancy (the Long Island Chapter); the Trinity Church Wall Street; the Central Park Conservancy; and the Cathedral Church of St. John The Divine. Williams continues to collect art in New York City, Sag Harbor, Long Island; Dark Harbor, Maine; and Naples, Florida; where he resides with his wife and family. He is married to Auldlyn Higgins Williams, and they have two grown daughters (Brooke and Eden).

See how E. T. Williams is related to other HistoryMakers
Donate Now
Click Here To Explore The Archive Today!