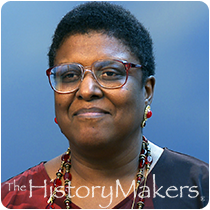 See how E. R. Shipp is related to other HistoryMakers

Journalist E.R. Shipp was born on June 6, 1955 in Conyers, Georgia to Johnnie Will Shipp and Minnie Ola (Moore) Shipp. After her graduation from Rockdale County High School in 1972, Shipp entered Georgia State University. While there, she completed an internship at The Atlanta Journal, the afternoon newspaper that later merged with the Atlanta Constitution. She graduated with her B.A. degree in journalism from Georgia State University in 1976. In 1979, Shipp earned her M.S. degree in journalism from Columbia University.

Shipp joined the New York Times as a reporter in 1980. In 1983, she became a Chicago correspondent for the Times, covering education, politics and other topics. Shipp moved back to New York City in 1987, primarily focusing on legal affairs. That same year, she became part of a team assigned to cover the case of Tawana Brawley, an African American teenager who accused several men of raping her. In 1990, Shipp became an editor at the New York Times. In 1993, she left the New York Times to pursue graduate work and teaching at Columbia University. Shipp graduated with her M.A. degree in history from Columbia University in 1994, and then received her J.D. degree from Columbia in 1996.

In 1994, Shipp began writing a column for the New York Daily News. During 1995, Shipp’s columns about affirmative action, the O.J. Simpson murder trial, the Million Man March and other controversial subjects earned her a 1996 Pulitzer Prize for commentary. She remained at the Daily News until 1998, when she became the ombudsman for The Washington Post. She served in that capacity for the Post until 2000. Shipp returned to teaching at Columbia University that year, and resumed her New York Daily News column. In 2005, she became a journalism professor at Hofstra University. From 2011 to 2012, Shipp contributed opinion pieces to The Root, an African American-oriented site owned by The Washington Post Company. Shipp was named an associate professor and journalist-in-residence at Morgan State University in 2012; and, in 2013, she began work as a columnist for The Huffington Post.

See how E. R. Shipp is related to other HistoryMakers
Click Here To Explore The Archive Today!