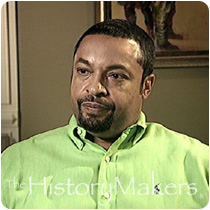 See how E. Lynn Harris is related to other HistoryMakers

Best-selling author E. Lynn Harris was born Everette Lynn Harris on June 20, 1955 in Flint, Michigan. Harris grew up and attended elementary and high schools in Little Rock, Arkansas. He attended the University of Arkansas at Fayetteville and graduated with honors with a degree in journalism. While in college, Harris became his school’s first African American male cheerleader and editor of the school’s yearbook.

After earning his degree, Harris started his career as a computer sales executive. He spent the next thirteen years selling computers for IBM, Hewlett-Packard, and AT&T in Dallas, Washington, D.C., and Atlanta. In 1991, Harris quit his computer sales career and decided to write his first novel, Invisible Life. He initially failed to find a publisher for it, so he used $25,000 of his own money to publish and distribute it. He sold his book mostly at Black-owned bookstores, beauty salons, and book clubs. The popularity of this book caused Anchor Books to publish and “officially” launch Invisible Life to the country. His second novel, Just As I Am, made Harris the first male writer to have a number-one hardcover book on the Blackboard list. Harris has written five novels that have appeared on the New York Times Bestseller list, and six of them have sold more than one million copies. Three of his novels have been optioned by Hollywood production companies to be made into films.

Harris’ novels weave tales with candid portrayals of pain and passion about middle class professional African Americans in today’s society. His works broke down taboos about Black sexuality and the lifestyles of gay and bisexual men. He created realistic portrayals of individuals struggling to define their sexual identities.

Harris won numerous awards, prizes, and accolades during his writing career. In 1996, his novel, Just As I Am, was named Blackboard’s Novel of the Year. In 1997, If This World Were Mine was nominated for a NAACP Image Award and won the James Baldwin Award for Literary Excellence. In 1999, the University of Arkansas honored Harris for outstanding professional achievement, and in 2000, he was inducted into the Arkansas Black Hall of Fame.

Harris set up his own foundation, called the E. Lynn Harris Better Days Literary Foundation, whose mission is to provide new writers with guidance and assistance in getting their work published so that society is exposed to and enriched by the works of these new authors. In 2003, Harris was invited to be a visiting professor in the English Department at his alma mater, the University of Arkansas at Fayetteville.

See how E. Lynn Harris is related to other HistoryMakers
Click Here To Explore The Archive Today!