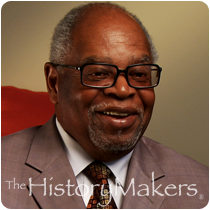 See how E. Lee Lassiter is related to other HistoryMakers

Newspaper columnist and journalism professor E. Lee Lassiter was born on July 11, 1936, in Carpenter, North Carolina. His father, Narvie Lassiter, was a tenant farmer while his mother, Margie Upchurch Lassiter, was a housewife and sold cosmetics. Lassiter’s parents made a pact that all of their children would graduate from high school and, unlike most tenant farmers, insisted they attend school every day. Lassiter attended the segregated Apex Elementary School in Apex, North Carolina and Barry O’Kelly High School in Method, North Carolina, graduating in 1954. He worked his way through college at Tuskegee Institute in Alabama in, receiving his B.A. degree in secondary education in 1959. He earned his M.A. degree in journalism from Boston University in 1963 and his Ed.D. degree from Morgan State University in 1993.

While a student at Tuskegee, Lassiter joined the Reserve Officers Training Corps. In 1961, he served in the Adjutant General’s Corps of the Army as a correspondence officer and technical writer and remained in the Army Reserves for another ten years. Near the close of 1961, he joined the editorial staff at the Baltimore Afro-American newspaper before moving, in 1965, to the Baltimore News-American, where he remained until the newspaper ceased operations in 1986. During his time at the Baltimore News-American, Lassiter wrote editorials and worked in various positions in the editing department. In 1974, he became a regular columnist at the newspaper, with syndicated columns in newspapers around the nation. After the paper closed, Lassiter accepted a position as an associate professor of English at Coppin State University. He retired from teaching in 1999, and began working as a public relations associate for the University. In 2003, he retired from that position, but accepted a contract to work in the same capacity online from his home.

Lassiter is an active member of numerous associations, including the NAACP, the Baltimore Tuskegee Alumni Association and the Black Writers’ Guild of Maryland. He has been a member of Mount Ararat Baptist Church in Baltimore for forty-four years. Active in community service for almost forty years, among his numerous awards are the Tuskegee University Presidential Associate Award, African Methodist Episcopal Church Christian Service Award and the Council for Cultural Progress Public Service Award. In 1981, he was honored with a Giant in Journalism trophy. Lassiter lives in Baltimore with his wife, Hannah Louise Lassiter.

E. Lee Lassiter was interviewed by The HistoryMakers on July 16, 2010.

See how E. Lee Lassiter is related to other HistoryMakers
Click Here To Explore The Archive Today!