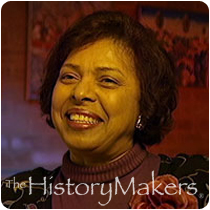 Favorite Color:
Blue
Favorite Food:
Turkey Burgers
Favorite Time of Year:
Summer
Favorite Vacation Spot:
Africa, Caribbean
Favorite Quote:
When There Is A Will, There Is A Way.

Favorite Color:
Blue
Favorite Food:
Turkey Burgers
Favorite Time of Year:
Summer
Favorite Vacation Spot:
Africa, Caribbean
Favorite Quote:
When There Is A Will, There Is A Way.

See how E. Faye Williams is related to other HistoryMakers
Donate Now

Entrepreneur and civic leader E. Faye Williams is an accomplished attorney, businesswoman and teacher. Born in 1941, Williams has studied at several universities, and holds several advanced degrees. She earned her law degree from Howard University, and has worked as a counsel to Congress and a professor of international law at the Southern University Law Center. Additionally, she holds both a master's degree and a doctorate in public administration. She became the first African American to run a competitive congressional campaign in Louisiana, losing by about 5,000 votes. An active church parishioner and minister, Williams completed a candidacy for a doctorate of ministry at Wesley Theological Seminary in Washington D.C.

Williams has made her biggest mark as an activist for peace and human rights. Williams published three books, most notably,The Peace Terrorists, which is a day by day account of her forty-day peace mission prior to the First Gulf War. Williams was one of 200 women held at gunpoint for twenty days in the Arabian Sea. In 1995, she helped organize the Million Man March, serving as host committee co-chair and international spokesperson. At the march, Williams was one of the few women to address the large crowd assembled on the Mall.

Inspired by the Million Man March, Williams started Natural Health Options and Carver/Curtis Products, where she serves as president and CEO. Her companies hold exclusive rights to produce the natural health remedies pioneered by George Washington Carver and his assistant, Austin W. Curtis. Williams also helped organize the Million Family March in 2000. She remains active in several civic organizations. She sits on the board of Partners for Peace, is an adviser to the Woman's Health Network and Council on Nutrition, and works on the steering committee for Change the Name. Williams is the recipient of numerous awards for her activism and service to community.

See how E. Faye Williams is related to other HistoryMakers
Donate Now
Click Here To Explore The Archive Today!