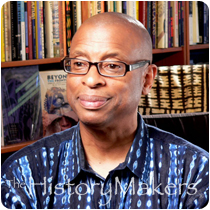 See how E. Ethelbert Miller is related to other HistoryMakers
Donate Now

Academic administrator, author, and poet Eugene Ethelbert Miller was born on November 20, 1950, the youngest of three children, to Egberto Miller, an immigrant from Panama, and Enid Marshall Miller, a homemaker. Born in New York City in the South Bronx, Miller attended Howard University in the fall of 1968. While at Howard University, he studied with Stephen Henderson, one of the foremost literary critics of the Black Arts Movement. In 1972, he graduated from Howard University with a degree in Afro-American Studies, the first member of his family to graduate from college.

In 1974, Miller became Director of the African American Resource Center at Howard University, allowing him to develop his own talents and to nurture emerging African American artists. Also in 1974, he published his first two collections of poetry, Andromeda and The Land of Smiles and the Land of No Smiles. In 1979, Marion Barry, Mayor of Washington, D.C., proclaimed September 28, 1979 “E. Ethelbert Miller Day," and Barry presented Miller with the Mayor’s Art Award for Literature in 1982. In 1994, Miller published the anthology In Search of Color Everywhere, which won the 1994 PEN Oakland Josephine Mile Award. Three years later, he received the Stephen E. Henderson Award for outstanding achievement in literature and poetry from the African American Literature and Culture Society. In 2000, Miller wrote Fathering Words, a memoir which traced his family background and the roots of his art as an African American writer.

Miller is a board member of the Institute for Policy Studies (IPS), Network of Educators on the Americas and The Writer’s Center. He is a former board member of the Associated Writing Programs and the Humanities Council of Washington and has also worked previously as a core faculty member of the Bennington Writing Seminars at Bennington College. Miller is an advisory editor for the African American Review and an advisory board member of Arts & Letters: Journal of Contemporary Culture. In addition to these responsibilities, Miller has also remained the director of the African American Resource Center at Howard University. He is married to Denise King-Miller, and has two children, Jasmine Simone and Nyere Gibran.

E. Ethelbert Miller was interviewed by The HistoryMakers on July 27, 2007.

See how E. Ethelbert Miller is related to other HistoryMakers
Donate Now
Click Here To Explore The Archive Today!