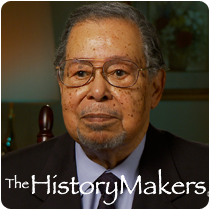 See how E. Don Sarreals is related to other HistoryMakers

Meteorologist E. Don Sarreals was born on September 22, 1931 in Winston Salem, North Carolina to parents Espriela Sarreals and Sadie Scales. While still a young child, Sarreal’s family migrated to New York City. He attended New York City Public School No. 46 and New York City Junior High School No. 164 before graduating from Bronx High School of Science in 1949. Sarreals went on to earn his B.S. degree in meteorology from the City Colleges of New York in 1955 and his his M.S. degree in meteorology from New York University in 1958.

Before his career as a meteorologist began, Sarreals served in the U.S. Army in 1954 and worked as a part-time lecturer while earning his graduate degree. In 1961, Sarreals began his career as a weather radar supervisor in the National Weather Service (NWS) New York Forecast Office. In 1976, Sarreals accepted a position as the television meteorologist for the National Broadcasting Corporation’s WRC-TV in Washington, D.C., from 1969 to 1975, while concurrently serving as president and consultant for Storm Finders, Inc. As the dissemination meteorologist for the NWS Headquarters from 1976 to 1980, Sarreals helped to develop the nation’s first government-funded radio working system, NOAA Weather Radio. Sarreals also worked as the television meteorologist for the Maryland Center for Public Broadcasting. From 1980 to 1992, Sarreals was assigned as chief of Operations and Requirements for the Next Generation Weather Radar Project (NEXRAD). In 1984, Sarreals was appointed chairman of the Working Group for Doppler Radar Meteorological Observation. Sarreals also served as a staff member in the NWS Modernization Division, and as as assistant federal coordinator for DOC/NOAA/NWS Affairs in the Office of the Federal Coordination for Meteorological Service.

Sarreals is a fellow of the National Academy of Sciences, a recipient of the Ward Medal for proficiency in meteorology, and he is a member of the American Meteorological Society. Sarreals is also the author of the Federal Meteorological Handbook No. 1: National Weather Radio Operations supervised the development of Federal Meteorological Handbook No. 2: Doppler Weather Radar Observations. For his contributions and accomplishments, Sarreals was selected for inclusion in Who’s Who Among Black Americans.

E. Don Sarreals was interviewed by The HistoryMakers on January 15, 2013.

See how E. Don Sarreals is related to other HistoryMakers
Click Here To Explore The Archive Today!