Information about A. Dwight Pettit 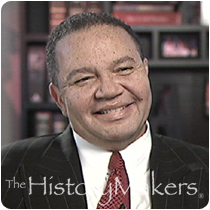 See how A. Dwight Pettit is related to other HistoryMakers

Alvin Dwight Pettit was born on September 29, 1945, in Rutherfordton, North Carolina. His mother worked as a beautician and his father worked as an engineer. His family migrated to Baltimore after his father was offered an engineering job in Maryland. In 1958, his father initiated a lawsuit against Harford County, Maryland school officials, forcing the school system to integrate the all white Aberdeen High School. Pettit, represented by Thurgood Marshall, won his suit and was admitted to Aberdeen and graduated in 1963. In addition to being the first African American male to attend the school, he also integrated the football team.

Pettit attended Howard University from 1963 until 1967, where he earned his bachelor’s of arts degree. While at Howard, Pettit played football, participated in the ROTC program, reaching the rank of colonel and pledged Kappa Alpha Psi fraternity. While at Howard, he received the Holland Ware award for the student athlete demonstrating all around athletic and academic ability. Pettit earned his law degree from Howard in 1970.

In 1970, Pettit began his career as a trial attorney for the Small Business Administration under President Richard Nixon. His duties included preparing briefs for the Department of Justice on fraud cases involving SBA loans. He litigated his first private case, Pettit vs. the United States. The case received national acclaim and is considered a landmark decision, setting the standard for back pay awards in discrimination cases. In 1973, Petit brought the first suit in the country against Maryland for discrimination in the bar examination. The case would lead to other states changing its testing practices. In 1973, Petit left the SBA and formed Mitchell, Petit, David and Gill and later his own practice.

Pettit handled many high profile criminal and personal injury cases. In 1977, he won Scott v. Sutton Place, which determined that Maryland landlords have responsibility and are liable for criminal activity on their property. In 1983, he won his first million-dollar judgment against the Washington, D.C. Transit Authority in the accident case, Goodwin v. Washington Metropolitan Area Transportation. Pettit continues to practice law in Baltimore, where he resides with his wife, Barbara.

See how A. Dwight Pettit is related to other HistoryMakers
Click Here To Explore The Archive Today!