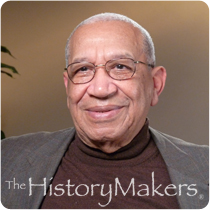 See how Dr. William Finlayson is related to other HistoryMakers

Obstetrician and gynecologist Dr. William Edward Finlayson was born on September 1, 1924 in Manatee, Florida. Finlayson served as a 1st Lieutenant in the United States Army from 1943 through 1946 and served in the Army Reserves from 1946 to 1953. He received his B.S. degree from Morehouse College in 1948 and his M.D. from Meharry Medical College in 1953. Finlayson completed his residency at the University of Minnesota in 1958.

In 1971, Finlayson founded the first black-owned bank in Milwaukee: North Milwaukee State Bank. He also serves on the board of directors and is the bank’s chairman. In founding the bank, Finlayson’s mission was not profit based. Rather, he intended to add stature and viability to underserved communities by offering full-service banking to individuals and businesses. North Milwaukee State Bank’s mission is to facilitate community development and economic growth, personal and business advancement, home ownership growth, and financial education.

Finlayson was interviewed by The HistoryMakers on November 18, 2008.

See how Dr. William Finlayson is related to other HistoryMakers
Click Here To Explore The Archive Today!