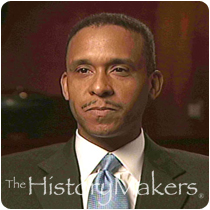 See how Dr. Wayne Riley is related to other HistoryMakers
Donate Now

Dr. Wayne Joseph Riley, President and CEO of Meharry Medical College was born on May 3, 1959 in New Orleans, Louisiana to Jacqueline Cerf Riley and Dr. Emile Edward Riley. His late father, who grew up with Andrew Young, Dr. Walter Young and Ellis Marsalis spoke of his days at Meharry Medical College. Raised in San Francisco, Buffalo and New Orleans, Riley attended San Gabriel School, Arch Angel Elementary School and St. Francis Cabrini Elementary School. In 1977, Riley graduated from Brother Martin High School in New Orleans as the top student and a member of the National Honor Society. He also was an active member of Youth for (Ernest “Dutch”) Morial for mayor. At Yale University, Riley, an officer in the Black Student Alliance, marched in Washington against South African apartheid in 1979. He graduated in 1981 with his B.S. degree in medical anthropology.

Riley was hired by Mayor Dutch Morial as part of the Comprehensive Employment and Training Act (CETA). By 1986, Riley, at age 26, was elevated to deputy mayor of New Orleans, while taking pre-med courses at Xavier University. In 1991, Riley enrolled in Morehouse School of Medicine. There, under the leadership of Dr. Hugh Glouster and Dr. Louis Sullivan, he served twice as class president and earned his M.D. degree in 1993. Riley completed his residency training in internal medicine at Baylor College of Medicine in 1996. He also holds a M.P.H. degree in Health Systems Management from the Tulane University School of Public Health and Tropical Medicine, and was awarded an M.B.A. from Rice University’s Jesse H. Jones School of Management in 2002.

Riley was named vice president and vice dean for health affairs and governmental relations for Baylor College of Medicine. There, Riley was instrumental in the development of Baylor’s Community Economic Development program, the M.D./J.D. joint degree program with the University of Houston Law Center and serves on the faculty of the Rice’s Jones Graduate School of Management. He was the first African American corporate officer in Baylor’s one hundred plus year history. In 2004, Riley was named host of Baylor’s TV Healthline, which is distributed to more than 80 television markets. In 2005, Riley was elected to the American College of Physicians’ Board of Governors as Governor-elect for the Texas Southern region of the ACP (American College of Physicians). In 2006, Riley was named the tenth President and CEO of Meharry Medical College, his father’s alma mater and the nation’s largest private, historically black institution dedicated to educating healthcare professionals. As president, he manages an alliance with Vanderbilt University Medical Center and the funding of Nashville General Hospital. Riley, the recipient of many honors, received the 2006, National Association for Equal Opportunity in Higher Education Distinguished Alumnus Award.

Riley is married to Dr. Charlene M. Dewey, and they have two children.

Riley was interviewed by The HistoryMakers on March 16, 2007.

See how Dr. Wayne Riley is related to other HistoryMakers
Donate Now
Click Here To Explore The Archive Today!