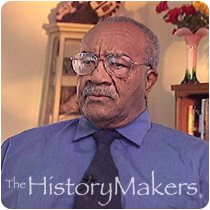 See how Dr. Warren Strudwick, Sr. is related to other HistoryMakers

Dr. Warren James Strudwick was born on December 23, 1923, in Durham, North Carolina. His mother was a teacher and his father a physician. As a child, he enjoyed a privileged life until his father’s death in 1931, when he was eight years old. Strudwick attended Whitted Elementary School and as a young boy enjoyed building model airplanes and was a member of the safety patrol. He received his diploma from Hillside High School in 1940.

Strudwick attended North Carolina College for Negroes in 1940, where he studied chemistry until he transferred to West Virginia State College in 1942. That same year, he was drafted into the United States Marine Corps where he served in a combat unit during World War II. In 1943, he attended Purdue University to complete Officers Training School. In 1946, Strudwick entered Howard University, receiving his B.S. degree in biology and chemistry in 1948. He went on to attend Howard University Medical School and while a student met and married his wife, Dr. Bette Catoe. He graduated from medical school in 1952.

In 1958, Strudwick helped to integrate Washington, D.C. hospitals. From 1961 to 2000, he taught surgery at Howard University Medical School. While teaching, he also operated a successful private practice in Washington, D.C. Strudwick was a member of numerous professional organizations including the American Board of Surgery, the American Medical Association, the American Cancer Society and the American Society of Abdominal Surgeons. He was also actively involved in the NAACP, Urban League and Kappa Alpha Psi Fraternity. Strudwick also wrote and published a number of medical related articles.

Strudwick passed away on October 27, 2008 at the age of 84. He leaves behind his wife and three grown children; two are physicians and the other an attorney.

See how Dr. Warren Strudwick, Sr. is related to other HistoryMakers
Click Here To Explore The Archive Today!