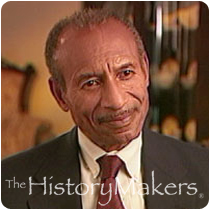 See how Dr. Virgil Norris is related to other HistoryMakers

Born in Tallahassee, Florida, Virgil C. Norris has practiced medicine in the Palm Beach area for forty years. He graduated with his B.S. from Hampton Institute in Hampton, Virginia, in 1950. He went on to study medicine at Meharry Medical College in Tennessee and received his M.D. in 1959. Dr. Norris has enjoyed a twenty-seven year career as a surgeon and general practitioner for the Palm Beach community.

Aside from practicing medicine, Norris takes an active role in his community. He has served as president of the Delray Club, Masonic Lodge, Naciremas Club and Omega Psi Phi Fraternity; and as a member of the NAACP, ACLU, Delray Board of Realtors and St. Paul A.M.E. Church. Norris received the First Annual Black Award for Medicine and Health Care in 1989. He and his wife Barbara have six children.

See how Dr. Virgil Norris is related to other HistoryMakers
Click Here To Explore The Archive Today!