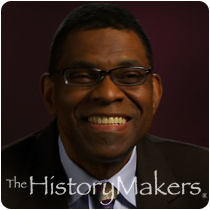 See how Dr. Terry Mason is related to other HistoryMakers

Chief Medical Officer, Terry Mason was born on September 13, 1951 in Washington, D.C. Mason attended Loyola University in Chicago and received his B.S degree in biological science. He earned his M.D. degree from the Abraham Lincoln School of Medicine at the University of Illinois. Mason completed his residency of General Surgery at the University of Illinois Metropolitan Group Hospitals Program and his residency of urology at the Michael Reese Hospital and Medical Center.

Upon completing his residencies, Mason started his practice of urology with Dr. Harvey J. Whitfield as Terry Mason MD, SC. At Mercy Hospital and Medical Center he developed a specialty service for male erectile dysfunction, and prostate cancer. In approximately 1992, Mason became radio host of “Doctor in the House” WVON 1690 AM. The following year he founded Center for New Life, a business dedicated to integrating diet modification, and exercise to treat chronic diseases. In 2004, he launched the Restar4Health campaign. The campaign encouraged the public to stop unhealthy eating habits and to make smart food choices. In 2005, Mason became the commissioner of health for the city of Chicago. As Commissioner, he was responsible for over 1200 employees with an annual operating budget of approximately 200 million dollars. Mason has detected and managed health threats to the citizens of the City of Chicago, and held over seventy-five press conferences.

In 2009, Mason retired as Commissioner of public health, and became the System Chief Medical Officer. He served as interim chief executive officer for the Cook County Health and Hospital System from May 2011 until October 2011. He advised and led a team of medical experts on matters of public health importance. He has also served as national chairman of urology at the National Medical Association, and the Midwest regional chair for Chicago’s National Black Leadership Initiative on Cancer. Mason is a member of the Cook County Physicians Association and was featured in the film “Forks over Knives” in 2001. Mason’s work has features on My Fox Chicago and Chicago Tonight for American Heart Health month. He has features in Ebony Magazine and authored a book titled, Making Love Again: Renewing Intimacy and Helping Your Man Overcome Impotence. Mason currently resides in Chicago and has two adult children.

Terry Mason was interviewed by The HistoryMakers on April 20, 2012.

See how Dr. Terry Mason is related to other HistoryMakers
Click Here To Explore The Archive Today!