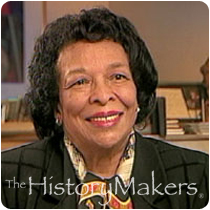 Favorite Time of Year:
All Seasons
Favorite Vacation Spot:
Florida
Favorite Quote:
A Job Well Done Is Its Own Reward

Favorite Time of Year:
All Seasons
Favorite Vacation Spot:
Florida
Favorite Quote:
A Job Well Done Is Its Own Reward

See how Dr. Roselyn Payne Epps is related to other HistoryMakers

Dr. Roselyn Payne Epps was born in Little Rock, Arkansas. Both of her parents were educators, as were her grandparents. Epps attended elementary school at Powell Laboratory School in Savannah, Georgia, and afterwards attended Palmer Memorial High School in Sedalia, North Carolina, before enrolling at Howard University in Washington, D.C. She graduated with a B.S. in 1951, and obtained an M.S., also from Howard, in 1955.

Upon receiving her M.S., Epps became a rotating intern with the United States Public Health Service at Freedmen's Hospital in Washington (later renamed Howard University Hospital). In 1956, she began a pediatric residency with the hospital, and two years later became its chief resident.

That year also saw her become a professor of pediatrics and children's health at Howard, and a year later, she received an M.A. from American University in Washington, D.C. She would go on to become the chief of the Child Development Division and director of the Child Development Center at Howard. Among her accomplishments during her time there were overseeing a program that aided disabled children and their parents, and she was the founder of the High Risk Young People's Project, which brought together several university health science departments, community organizations, and government agencies within the district.

In 1988, she went to work for the National Cancer Institute in Bethesda, Maryland. Semi-retired since 1998, she serves s a consultant for the public and private sector. Epps has written more than ninety articles for medical publications, was a co-editor for The Women's Complete Handbook , and was the first African American and female president of the District of Columbia chapter of the American Academy of Pediatrics. She has been involved in various professional and philanthropic undertakings and is the recipient of more than sixty awards. The Council of the District of Columbia declared February 14, 1981, Dr. Roselyn Payne Epps Day in Washington, D.C.

Roselyn Payne Epps was interviewed by The HistoryMakers on March 16, 2003.

See how Dr. Roselyn Payne Epps is related to other HistoryMakers
Click Here To Explore The Archive Today!