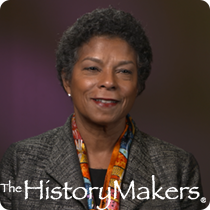 See how Dr. Risa Lavizzo-Mourey is related to other HistoryMakers

Non-profit executive Dr. Risa Lavizzo-Mourey was born on September 25, 1954 in Seattle, Washington to Dr. Blanche Sellers-Lavizzo and Dr. Philip Lavizzo. She attended the University of Washington before transferring to the State University of New York-Stony Brook for two years. Lavizzo-Mourey then continued her education at Harvard Medical School, graduating in 1979. In 1984, she was selected as a Robert Wood Johnson Foundation Clinical Scholar, and earned her M.B.A. degree in health policy from the Wharton School at the University of Pennsylvania in 1986.

Lavizzo-Mourey joined the faculty of the University of Pennsylvania as an assistant professor. During her tenure, she served as the director of the Institute on Aging from 1984 to 1992. She took a leave of absence from the university to work as deputy administrator for the Agency for Health Care Policy and Research under President George H.W. Bush’s administration. Lavizzo-Mourey then served as quality of care chair for President Bill Clinton’s panels on health care until 1994, when she returned to the University of Pennsylvania as a professor. Lavizzo-Mourey served as the associate executive vice president for health policy for the health system from 1994 to 2001, and the Sylvan Eisman professor of medicine and health care systems at the university from 1997 to 2002. In 2001, Lavizzo-Mourey was hired as a senior vice president of the Robert Wood Johnson Foundation, and was appointed to serve as the president and CEO of the foundation in 2003. While at the Robert Wood Johnson Foundation, Lavizzo-Mourey continued to see patients at a clinic in New Jersey, and launched an influential campaign against childhood obesity in 2007. The initiative decreased the obesity rate among children aged two to five years and halted its rise among those aged two to nineteen years.

Lavizzo-Mourey was the recipient of numerous awards, including twenty honorary doctorates from institutions like Brown University, the University of Pennsylvania, Tufts University, Morehouse School of Medicine, Meharry Medical College and Charles R. Drew University of Medicine and Science. She appeared on Forbes’ list of the most important women in the world eight times, and as one of Modern Healthcare’s one hundred most influential people in health care eleven times.

Dr. Risa Lavizzo-Mourey was interviewed by The HistoryMakers on December 14, 2016.

See how Dr. Risa Lavizzo-Mourey is related to other HistoryMakers
Click Here To Explore The Archive Today!