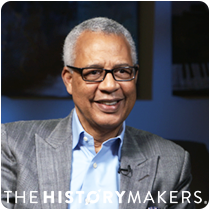 Favorite Color:
Blue
Favorite Food:
Eggs, Bacon, Toast and Coffee
Favorite Time of Year:
All Seasons
Favorite Vacation Spot:
Inside of My Mind
Favorite Quote:
I'm in Love With the Unity of the Divine Intelligence.

Favorite Color:
Blue
Favorite Food:
Eggs, Bacon, Toast and Coffee
Favorite Time of Year:
All Seasons
Favorite Vacation Spot:
Inside of My Mind
Favorite Quote:
I'm in Love With the Unity of the Divine Intelligence.

See how Dr. Reed V. Tuckson is related to other HistoryMakers
Donate Now

Healthcare executive Reed V. Tuckson was born on February 18, 1951 in Washington, D.C. to Coleman and Evelyn Tuckson. He received his B.S. degree from Howard University in 1973, and his M.D. degree from Georgetown University School of Medicine in 1978. From 1978 to 1981, he trained at the Hospital of the University of Pennsylvania as a specialist in internal medicine, served as an admitting doctor at Philadelphia’s Veterans Affairs hospital, launched a radio program aimed at African American listeners, and organized a support group for sickle-cell anemia patients. His interest in public health led him to a Robert Wood Johnson Foundation Clinical Scholars fellowship, where he studied health care administration and policy at the University of Pennsylvania's Wharton School of Business, from 1981 to 1983.

Tuckson worked for Elmira Jeffries Nursing Home in Philadelphia as a founding medical director from 1981 to 1985. Returning to Washington, Tuckson worked for the D.C. Mental Retardation and Developmental Disabilities Administration from 1983 to 1985. He then held the position of District of Columbia deputy commissioner of public health from 1985 to 1986; and a year later, was promoted to commissioner of public health for D.C., a position he held from 1986 to 1989. He joined the March of Dimes Birth Defects Foundation as senior vice president for programs before being appointed as the new president of the Charles R. Drew University of Medicine and Science in Los Angeles, serving from 1991 to 1997. Tuckson left Drew University to work for the Chicago-based American Medical Association as the group vice president for professional standards from 1997 to 2000. He accepted an offer from the United Health Group in Minneapolis, Minnesota to serve as senior vice president of consumer health and medical-care advancement from 2000 to 2006 when he was then promoted to executive vice president and chief of medical affairs at United Health where he served until 2013. He then established Tuckson Health Connections, a private health and medical care consulting company.

Tuckson has held numerous appointments in the areas of health care, the federal government and academia including active memberships in the American Medical Association and the Institute of Medicine-National Academy of Sciences. He was appointed to the Advisory Committee to the Director of the National Institutes of Health, and has served on numerous boards, including those of Neptune Technologies & Bioressources, Inc.; the National Hispanic Medical Association; the Alliance for Health Reform; the National Patient Advocate Foundation; ViTel Net, Inc.; Cell Therapeutics, Inc.; Inform Genomics, Inc.; AcademyHealth; Big Brothers Big Sisters of the Greater Twin Cities; and Minnesota Public Radio. He also served on the board of trustees of the Arnold P. Gold Foundation, on the advisory board of the Johns Hopkins Berman Institute of Bioethics, and as president of the Society of Medical Administrators.

Reed V. Tuckson was interviewed by The HistoryMakers on March 5, 2018.

See how Dr. Reed V. Tuckson is related to other HistoryMakers
Donate Now