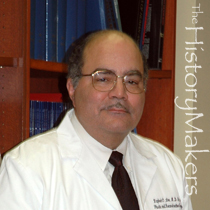 See how Dr. Raphael C. Lee is related to other HistoryMakers

Dr. Raphael C. Lee was born in Sumter, South Carolina, on October 29, 1949. Graduating from high school in 1967, Lee went to the University of South Carolina, where he earned his B.A. degree in electrical engineering in 1971. Lee enrolled in Temple University School of Medicine and Drexel University College of Engineering; in 1975, earning both his M.D. and his M.A. degrees.

Lee's resume includes a list of awards, recognitions, professional memberships, and publications. Lee was awarded a 1981 MacArthur Prize Fellowship, and a 1985 Searle Scholar Award, as well as being named by the Museum of Science and Industry in Chicago as one of the sixteen outstanding scientists in African American history. In 2018, Lee received the Pierre Galletti Award from the American Institute of Medical and Biological Engineering, generally considered America's highest award in the field of biomedical engineering and technology, for his contributions to understanding the molecular biomechanics of traumatic injuries. Lee held a membership in the New York Academy of Science; was awarded a fellowship by the American College of Surgeons; and was a member of the Biomedical Engineering Society. Lee was also listed in Who's Who in America, Who's Who in the World, Notable 20th Century Scientists, and was named as one of America's 100 Brightest Young Scientists by Science Digest.

Lee specialized in the repair of scars and burns, and developed a number of treatments in the course of his research.

See how Dr. Raphael C. Lee is related to other HistoryMakers
Click Here To Explore The Archive Today!