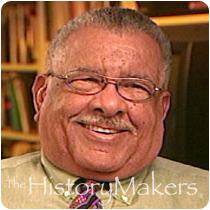 See how Dr. Price Cobbs is related to other HistoryMakers
Donate Now

Price Mashaw Cobbs, black psychiatrist, author, and management consultant, was born November 2, 1928, in Los Angeles, California, the youngest of three children. Cobbs's parents were politically left, sophisticated migrants from the American South, who called it the "old country." Cobbs's family invested in their son the analytical tools to answer his endless questions; as a youth, he read Richard Wright, Ernest Hemingway, Langston Hughes, Sigmund Freud, W.E.B. DuBois, and Booker T. Washington. Cobbs also eagerly followed Time Magazine, the Pittsburgh Courier and the Chicago Defender; his interests ranged from religion and lynching, to what it was like to live in other cities. Cobbs graduated from Jefferson High School in 1946 and started that same year at U.C.L.A. After transferring to the University of California at Berkeley, Cobbs dropped out to join the Army; he served in Germany before returning to Berkeley, where he graduated in 1954.

Cobbs graduated from Meharry Medical School with his M. D. in Psychiatric Medicine in 1958, and was board certified in 1966; he built his private practice with patients referred by local hospitals and doctors. The Civil Rights Movement exacerbated the problems experienced by Cobbs's black patients through the discomfort brought on by intense social change. In 1968, Cobbs co-wrote the classic work, Black Rage, with William Grier; this timely book contended that at the death of Dr. King, not some, but all blacks were angry. Black Rage's analysis of seething black anger and real white racism startled the country and challenged black people to reject practices based in the continuum of a slave culture. Black Rage became standard reading in college classrooms and community study groups across the nation. Cobbs was a popular lecturer and talk show guest. His next book, The Jesus Bag, further challenged the comfort zone of the establishment; his most recent work, Cracking the Corporate Code: From Survival to Mastery, co-authored with Judith L. Turnock, was about power.

Cobbs served as the president and CEO of Pacific Management Systems of San Francisco where he applied the principles of enthnotherapy to his work as a management consultant.

See how Dr. Price Cobbs is related to other HistoryMakers
Donate Now
Click Here To Explore The Archive Today!