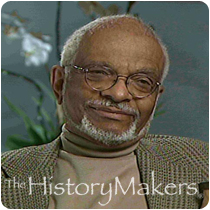 See how Dr. Paul Knott is related to other HistoryMakers

Cardiologist, inventor and nautical entrepreneur Dr. Paul Knott was born Albert Paul Lowe Knott, Jr. on March 23, 1935 in Pittsburgh, Pennsylvania. His ancestors include his paternal great grandfather, A.M.E. Bishop Gaston Knott of Eastern Tennessee (founder of Gaston, Tennessee), his grandfather, Albert Knott, a Morristown College graduate (Class of 1898) and the first Black police officer in Pittsburgh, his father, Albert Paul Knott, Sr., a physician and social activist, his mother, Fannie Meredith Scott Knott, a teacher and her father who was a physician. Knott’s parents were friends of Pittsburgh Courier editor, Robert L. Vann, and entertained Eleanor Roosevelt, George, Jody and Philippa Schuyler and other notables in their Hill District home. Knott attended the University of Pittsburgh’s Frick School and graduated from Schenley High School, where he swam and was co-captain of the track team in 1952. Entering Yale University at age seventeen, Knott, one of four blacks in his class, co-founded and joined the campus NAACP, the largest university chapter of the organization at that time. He graduated with his B.A. degree in human behavior and cultural anthropology in 1956. Pursuing medicine, Knott earned his M.D. degree from Seton Hall College of Medicine in 1960. That same year, he did an internship at Georgetown University.

Appointed a cardiovascular research fellow at Chicago’s Michael Reese Hospital from 1961 to 1963, Knott became senior medical resident at Hines V.A. Hospital from 1963 to 1965, becoming board eligible in internal medicine and cardiology. Serving in the U.S. Navy, Knott was chief of cardiology at the United States Naval Hospital at Great Lakes, Illinois from 1965 to 1967. There, he wrote a white paper on racial discrimination in public facilities servicing military installations. As a result, a federal law was passed making racial discrimination illegal in public facilities. Knott attended the First World Black Festival of Arts and Culture in Dakar, Senegal in 1966. From 1966 to 1981, he was a cardiology consultant for Daniel Hale Williams Health Center in Chicago, while teaching medicine at Loyola University, the University of Illinois and Rush Medical College. Knott also served on the staff’s of Rush Presbyterian St. Luke’s Medical Center, Mile Square Community Health Center, Louise Burg Hospital, Provident Hospital and Bethany Hospital. At Tabernacle Community Hospital, he was associate medical director from 1972 to 1977. From 1977 to 1981, Knott served as chief medical and administrative officer for Bethany and Garfield Park Hospitals and Clinics. He was chief medical officer and medical administrator for Illinois’ Stateville Correctional Center from 1981 to 1983 where he implemented and directed the development of sick call procedures. Knott was medical director of Chicago’s Metropolitan Correctional Center from 1984 to 1986. Founding Correctional Healthcare Administrators in 1985, Knott has consulted on numerous medical projects. In 1988, he completed a feasibility study and plan for a 50,000 square foot facility at Chicago’s O’Hare International Airport. Through the 1990s, Knott worked as an emergency room and trauma physician. He also earned certification in advanced trauma life support.

In the 1980s, Knott established a successful charter boat business with six boats, the largest being a 220 passenger dinner boat. In the early 1990s, he invented and manufactured the Knott Lock, security device for automobiles. Knott, a member of Sigma Pi Phi for over forty years, lives in Chicago with his wife, Lynda and their two children.

Knott was interviewed by The HistoryMakers on January 14, 2007.

See how Dr. Paul Knott is related to other HistoryMakers
Click Here To Explore The Archive Today!