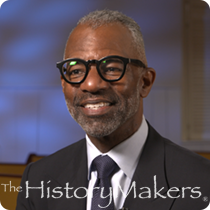 See how Dr. N. Anthony Coles is related to other HistoryMakers

Pharmaceutical executive Dr. Tony Coles was born on May 17, 1960 in Roanoke, Virginia to Neavelle Anthony Coles and Leona Rogers Coles. Coles graduated from DuVal High School in Lanham, Maryland and received his B.S. degree from Johns Hopkins University in Baltimore, Maryland, his M.S. degree in public health from Harvard University in Cambridge, Massachusetts, and his M.D. degree from Duke University in Durham, North Carolina.

Coles was a research fellow at Harvard Medical School, and then worked as a physician at Massachusetts General Hospital in Boston, Massachusetts, where he completed his cardiology and internal medicine training. Coles resigned from practicing medicine and in 1992, he was hired at Merck & Co., where he became vice president of the hypertension and heart failure business group and oversaw the marketing of the ACE inhibitor drugs to cardiologists. Two years later, he joined Bristol-Myers Pharmaceuticals, taking a more global role in introducing cardiovascular products, including the blockbuster anti-clotting agent clopidrogel (Plavix). Coles was then hired by Vertex Pharmaceutical in 2002, as the company’s senior vice president of commercial operations-pharmaceutical products. He then became president and chief executive officer of Onyx Pharmaceuticals. In 2014, Coles co-founded and served as the president and chief executive officer of Yumanity Therapeutics, a biotech startup company.

In addition to his professional career, Coles was active in multiple community and national organizations, including as a member of the board of trustees at Johns Hopkins University and Johns Hopkins Medicine, NPS Pharmaceuticals, Inc., the Smithsonian’s National Museum of African American History and Culture, the board of trustees for the Metropolitan Museum of Art in New York, and the Council of Foreign Relations. Coles also served as a director of Laboratory Corporation of America Holdings, Campus Crest Communities, Inc., the U.S. Olympic and Paralympic Foundation, McKesson Corporation, and Regeneron Pharmaceuticals, Inc. President Barack Obama also named him to the Precision Medicine Initiative in 2015. He also served as chairman of the board of directors of CRISPR Therapeutics AG since October 2015 and served on its Compensation Nomination and Corporate Governance Committee.

Coles and his wife, Robyn, have three sons.

Tony Coles was interviewed by The HistoryMakers on May 3, 2017.

See how Dr. N. Anthony Coles is related to other HistoryMakers