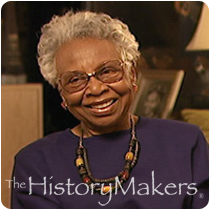 See how Dr. Muriel Petioni is related to other HistoryMakers

From the beginning, Dr. Muriel Petioni was destined to become a doctor. Born on January 1, 1914, into a family with a formidable medical tradition-nine of her family members are doctors-she spent her early childhood years in Trinidad and Tobago before moving with her family to Harlem, New York, where her father set up a private practice. Petioni soon followed in her father's footsteps, graduating with a B.S. from Howard University in 1934, and graduating from Howard University Medical School three years later.

After a two-year internship at Harlem Hospital Center from 1937 to 1939, Dr. Petioni became a college physician at several universities, and in 1942, she married a Tuskegee Airman named Mal Woolfolk. In 1947, a year after Woolfolk had returned from the war, the couple had their first and only son, Charles Woolfolk. Dr. Petioni took a break from medicine and spent the next three years as a housewife and mother.

In 1950, she returned not only to her profession, but also to her home, in Harlem, and set up a private practice in the very same office her father had used for his practice. She would continue this practice for forty years, tirelessly serving the Harlem community. A medical doctor, educator and community activist, she has worked diligently to ensure that underserved communities receive proper medical attention and equitable access to health care.

Dr. Petioni served for thirty years as a school physician in Central Harlem for the New York City Department of Health, as well as the supervising physician for Central Harlem and East Harlem from 1980 to 1984. She currently sits on the board for the Harlem Upper Manhattan Empowerment Zone and is chair and founder of the Friends of Harlem Hospital Center, organized in 1987 to raise funds and provide support for the 114-year-old hospital.

The advancement of women in medicine has always been important to Dr. Petioni, and in 1974, she founded the Susan Smith McKinney Steward Medical Society for Women, a professional association for black women physicians. This organization has been instrumental in providing institutional support for women in medical profession in the Greater New York area. In her work with the Coalition of 100 Black Women, Petioni has developed a mentorship program that guides young black women into careers in medicine.

Dr. Petioni is the recipient of numerous awards, honors and recognitions, too numerous to list. As she enters her sixth decade of community health work in Harlem, Dr. Petioni's remarkable energy, passion and dedication remain undiminished.

See how Dr. Muriel Petioni is related to other HistoryMakers
Click Here To Explore The Archive Today!