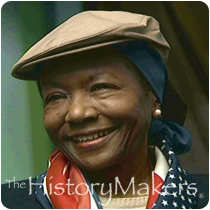 See how Dr. Mildred Jefferson is related to other HistoryMakers
Donate Now

Jefferson became the first African American woman to graduate from Harvard Medical School in 1951. She was the first woman to be a surgical intern at Boston City Hospital and the first woman admitted to membership in the Boston Surgical Society. She is, however, best-known for her longtime support and involvement in the “right-to-life movement” in America. She helped to establish the National Right to Life Committee and served three times as its president. She has been a local, regional and national speaker and activist.

Jefferson has had a career-long interest in medical jurisprudence, medical ethics and the interface between medicine and law, as well as their impact on public policy and society. As a founding member of state and national “right-to-life” organizations, she is president of Right to Life Crusade.

Jefferson is a founding member of the Board of Governors and a past President of the Value of Life Committee of Massachusetts and is also active with the American Life League and Americans United for Life Legal Defense Fund. Jefferson is also a member of Black Americans for Life and is held in high esteem by Feminists for Life. Jefferson passed away on October 18, 2010.

See how Dr. Mildred Jefferson is related to other HistoryMakers
Donate Now
Click Here To Explore The Archive Today!