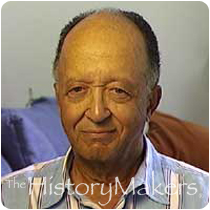 See how Dr. Marvin Shelton is related to other HistoryMakers

In a family of medical doctors, Dr. Marvin L. Shelton has helped patients walk pain-free for more than thirty years. Born in Pittsburgh on July 25, 1931, Shelton has made a reputation for himself with his many discoveries and advances in his work as an orthopedic surgeon in treating ankle fractures.

Educated at Howard University, Shelton received his B.A. in 1951, an M.A. in chemistry the following year, and his M.D. in 1956. After completing his internship, he did his residency in Honolulu, Hawaii. Shelton then served as chief of the Orthopedic Section at Fort Jackson, South Carolina, until 1964. From 1966 to 1994, Shelton headed the Residency Training Program at Harlem Hospital Center in New York. While at Harlem Hospital, Shelton saw a large number of unstable ankle fractures, leading him to further investigate the causes of such injuries. In 1967, he pioneered a new surgical technique that dramatically improved the prognosis for patients with this type of ankle injury. Shelton also helped to engineer a contoured plate system for fractures. This plate gained increasingly wide usage in the orthopedic field.

His discoveries and advances have made Shelton a highly sought-after speaker. Shelton has delivered more than two dozen lectures around the world; presented numerous papers and exhibits; and held visiting professorships at Yale University, the University of Minnesota and the University of Oregon. He also served as chairman of the Orthopedic Section of the National Medical Association and has been an active member and leader in many other professional associations and boards. In 1992, Shelton brought his trailblazing techniques to Presbyterian Hospital in New York, where he worked as an attending surgeon. Shelton and his wife, Arden Buckner, had four children.

See how Dr. Marvin Shelton is related to other HistoryMakers
Click Here To Explore The Archive Today!