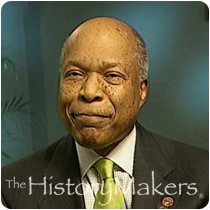 See how Dr. Louis W. Sullivan is related to other HistoryMakers

Federal cabinet appointee and college president Dr. Louis Wade Sullivan was born on November 3, 1933 in Atlanta, Georgia to Lubirda Priester and Walter Wade Sullivan. After graduating from Booker T. Washington High School, Sullivan received his B.S. degree in biology from Morehouse College in 1954. He went on to receive his M.D. degree from Boston University School of Medicine in 1958, completing his residency at New York Hospital-Cornell Medical Center.

In 1960, Sullivan began a pathology fellowship at Massachusetts General Hospital in Boston, before working at Boston City Hospital and studying hematology at the Thorndike Laboratory. He was hired as co-director of hematology at Boston University Medical Center in 1966; and, in 1967, he founded the Boston University Hematology Service. In 1975, Morehouse College Medical Education Program was founded and Sullivan returned to Atlanta to serve as its first dean, teaching biology and medicine and founding the Medical Education Program at Morehouse College. The Morehouse School of Medicine became independent from Morehouse College in 1981, with Sullivan as its president and dean. In 1988, President George H.W. Bush appointed Sullivan to serve as the U.S. Secretary of Health and Human Services. He returned to Morehouse School of Medicine in 1993 as president, retiring from the position in 2002.

In 1976, Sullivan helped found the Association of Minority Health Professions Schools to promote a national minority health agenda; and, in 1999, he hosted the public television show “Frontiers of Medicine.” In 2003, he was appointed by President George W. Bush to chair the White House initiative on historically black colleges and universities advisory committee. He also served as chairman of the National Health Museum and on the boards of United Therapeutics, Emergent BioSolutions, General Motors, Cigna, and Equifax.

Sullivan has received more than sixty honorary degrees, including an honorary M.D. degree from the University of Pretoria in South Africa. He received the Jimmy and Rosalynn Carter Award for Humanitarian Contributions to the Health of Humankind from the National Foundation for Infectious Diseases in 2008 and his autobiography received the NAACP Image Award for Literature in 2015.

See how Dr. Louis W. Sullivan is related to other HistoryMakers
Click Here To Explore The Archive Today!