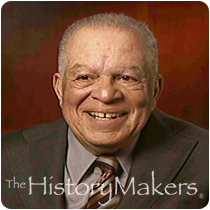 See how Dr. Lloyd C. Elam is related to other HistoryMakers
Donate Now

Founder of Meharry Medical College’s Psychiatry Department and retired college president Dr. Lloyd C. Elam was born on October 27, 1928 in Little Rock, Arkansas. His parents, Ruth Davis Elam and Harry Penoy Elam met in church in Little Rock. Elam attended Stephens School and graduated from Paul Laurence Dunbar High School in 1944 at age fifteen. He went to junior college in Little Rock before moving to Harvey, Illinois. There, Elam worked for the Maremont Automobile Plant and commuted to Chicago to attend classes at Roosevelt University where he graduated with his B.S. degree in zoology in 1950. After a stint in the United States Army, Elam earned his M.D. degree from the University of Washington School of Medicine in 1957. From 1957 to 1958, Elam completed an internship at the University of Illinois Hospital in Chicago, and from 1958 to 1961, he served as a resident in psychiatry at the University of Chicago Hospital.

Elam joined Chicago’s Billings Hospital as staff psychiatrist and instructor of psychiatry in 1961. From 1961 to 1963, he served as assistant professor and chairman of the Psychiatry Department of Meharry Medical College in Nashville, Tennessee. Becoming a full professor in 1963, Elam was appointed interim dean of the college in 1966. In 1968, he was selected president of Meharry Medical College and supervised the school’s growth in that capacity until 1981. From 1981 to 1982, Elam was college chancellor. He served as Distinguished Service Professor of Psychiatry from 1982 to 1995 when he retired to serve as a volunteer faculty member. Elam served as a fellow at the Center for Advanced Study in Behavioral Sciences at Stanford, California in 1982. He was made Professor Emeritus of the Department of Psychiatry and Behavioral Sciences in 1996 and Chairman Emeritus in 1997. Elam is a member of the Tennessee Psychiatric Association, Tennessee Medical Association, American Medical Association, National Medical Association, American Psychiatric Association, American College of Psychiatrists, Black Psychiatrists of America, R.F. Boyd Medical Society and the American College of Forensic Examiners.

In 1973, Elam was presented an honorary Doctor of Laws from Harvard University. His other awards include honorary degrees from Meharry Medical College and St. Lawrence University; the 1988 National Board of Medical Examiners Distinguished Service Award; induction into the Alpha Omega Alpha Honor Society; the 1972 Nashville Club Man of the Year Award; the 1976 Human Relations Award from the National Conference of Christians and Jews and the 1988 Eleanor Roosevelt Key, Roosevelt University’s highest alumni award. Meharry Medical College established the Lloyd C. Elam Mental Health Center in his honor and that building now bares his name.

Elam and his wife, Clara Elam, R.N., have two daughters: Dr. Gloria Elam-Norris of Chicago and Dr. Laurie Elam-Evans of Atlanta. Elam passed away on October 4, 2008.

Elam was interviewed by The HistoryMakers on March 14, 2007.

See how Dr. Lloyd C. Elam is related to other HistoryMakers
Donate Now
Click Here To Explore The Archive Today!