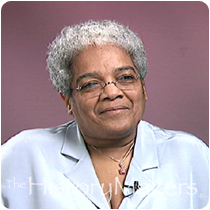 See how Dr. Linda Rae Murray is related to other HistoryMakers
Donate Now

Dr. Linda Rae Murray was born in Cleveland, Ohio on August 25, 1948. After graduating from Collinwood High School in 1966, Murray attended the University of Illinois at Chicago, where she earned her B.S. degree in mathematics in 1973. Murray continued her education at UIC, earning her M.D. in 1977. Following the completion of her M.D., Murray attended the University of Illinois School of Public Health in Chicago, where she earned her master’s of public health in 1980; she later returned to school to continue her education in the doctoral program at the University of Michigan School of Public Health.

After completing her medical degree, Murray became a resident physician in internal medicine and occupational therapy at Cook County Hospital, where she remained until 1980. In 1981, Murray left Cook County Hospital for Bethany Hospital, also in Chicago, and in 1983, became the medical director for the Manitoba Federation of Labour in Winnipeg, Canada. Murray returned to the United States in 1985, and began teaching at Meharry Medical College; in 1987, she returned to Chicago to work with the Chicago Department of Health. By 1992, Murray had become the medical director of the Near North Health Services Corporation. After a series of other high-level positions, Murray became the chief medical officer of Primary Care & Community Health: Ambulatory & Community Health Network of Cook County. Later, Murray became the attending physician at the Woodlawn Health Center. Throughout her career of health administration and medical practice, Murray also worked as a teacher, teaching internal medicine and midwifery, among other courses. In 2005, Murray was elected Chief Medical Officer of the Ambulatory & Community Health Network of the American Public Health Association, a position she would hold until 2009.

Murray was also an active member of her community, having been involved with dozens of groups and organizations over the years. From 1981 until 1983, Murray was a part of the First Congressional District of Illinois Health Task Force under Harold Washington; she returned to that role from 1985 to 1992 under Congressman Charles Hayes. Murray has received many awards, including the Daniel Hale Williams Award from the cook County Physician’s Association, and the Distinguished Service in the Health Field Award form the National Association of Minority Medical Educators.

See how Dr. Linda Rae Murray is related to other HistoryMakers
Donate Now
Click Here To Explore The Archive Today!