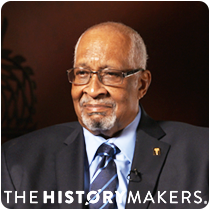 See how Dr. Leonard E. Lawrence is related to other HistoryMakers

Lawrence interned at E. J. Meyer Memorial Hospital in Buffalo, from 1962 to 1963 and then served two years as a general medical officer in the U.S. Air Force from 1963 to 1965. He returned to Indiana University School of Medicine and completed his residency and fellowship in child psychiatry and his chief residency in general psychiatry in 1969 at Indiana University School of Medicine. He was board certified in psychiatry in 1970 and child psychiatry in 1971. Lawrence was then assigned to the Child Guidance Clinic at Wilford Hall U.S. Air Force Medical Center in San Antonio, Texas from 1969 to 1972. He then joined the faculty of the Medical School of The University of Texas Health Science Center at San Antonio (UTHSCSA) as assistant professor in 1972 and served as associate dean for student affairs (Dean of Students) in the Medical School in 1981, serving in that role until his retirement in 2005. Lawrence retired as tenured professor in the Departments of Psychiatry, Pediatrics and Family and Community Medicine in 2005. The University of Texas Board of Regents bestowed upon him the title professor emeritus in 2005, and Lawrence returned to the department of psychiatry on a half-time basis to construct the faculty development process for the department.

Lawrence served as a member of numerous organizations including as the 92nd President of the National Medical Association (NMA) from 1993 to 1994. He also served as past chairperson of the Group on Student Affairs (GSA) Minority Affairs Section of the Association of American Medical Colleges (AAMC). He was awarded the AAMC Minority Affairs distinguished Service Award for his leadership and work on behalf of underrepresented minority students throughout the U.S. in 2004. He also served on the Council of Children, Adolescents and their Families of the American Psychiatric Association (APA) of which he is a Distinguished Life Fellow. He is also a Distinguished Life Fellow of the American Academy of Child and Adolescent Psychiatry (AACAP), he served as past membership chairperson. He received the 2005 AACAP Jeanne Spurlock Lectureship Award for his contributions nationally and internationally to the understanding of the role of race and culture in children’s mental health.

Lawrence served on the Executive Committee of United Way of San Antonio and Bexar County and chaired the Board of Trustees. He also chaired the Management Board of San Antonio Fighting Back, a major substance abuse intervention project funded through the Robert Wood Johnson Foundation.

Dr. Leonard E. Lawrence was interviewed by The HistoryMakers on June 6, 2018.

See how Dr. Leonard E. Lawrence is related to other HistoryMakers