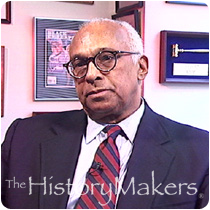 See how Dr. LaSalle D. Leffall, Jr. is related to other HistoryMakers

Leffall has served as visiting professor at over 200 medical institutions in the U.S. and abroad and authored or coauthored over 130 articles and chapters. He is a diplomate of the American Board of Surgery and a fellow of both the American College of Surgeons and the American College of Gastroenterology. His professional life has been devoted to the study of cancer, especially among African Americans. In 1979, as president of the American Cancer Society, Leffall developed programs and emphasized the importance of this study for the benefit of the African American population and other ethnic groups. Cancers of the head and neck, breast, colorectum and soft part sarcomas are his main areas of interest.

Surgeon, oncologist, medical educator and civic leader, and the recipient of many awards, Leffall has taught over 4,500 medical students and trained at least 250 general surgery residents. In 1995 he was elected president of the American College of Surgeons and in 2002 was named chairman of the President’s Cancer Panel. He and his wife, Ruthie have one grown son, LeSalle, III.

See how Dr. LaSalle D. Leffall, Jr. is related to other HistoryMakers
Click Here To Explore The Archive Today!