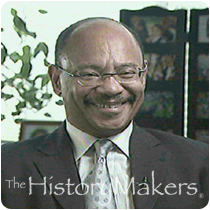 Favorite Color:
Black
Favorite Food:
Fried Chicken
Favorite Time of Year:
Spring
Favorite Vacation Spot:
St. Petersburg, Russia
Favorite Quote:
What Do You Want To Be When You Grow Up?

Favorite Color:
Black
Favorite Food:
Fried Chicken
Favorite Time of Year:
Spring
Favorite Vacation Spot:
St. Petersburg, Russia
Favorite Quote:
What Do You Want To Be When You Grow Up?

See how Dr. Kneeland Youngblood is related to other HistoryMakers
Donate Now

Physician, businessman, and presidential appointee Dr. Kneeland Youngblood, was born in Galena Park, Texas, on December 13, 1955. At the age of fourteen, Youngblood was working as a page on the floor of the Texas State Legislature; after graduating from high school, he attended Princeton University, earning his B.A. degree in political science in 1978. While at Princeton, Youngblood spent time studying abroad, attending both Warnborough College in Oxford, England, and the University of Stockholm in Sweden from 1976 to 1977. In 1978, only a few months shy of his graduation, Youngblood took part in a sit-in at Nassau Hall with two hundred other students to protest Princeton’s investments in South African businesses, risking the threat of expulsion. Youngblood and the other students were not expelled, and in the autumn of 1978, he began attending the University of Texas Health Science Center, from which he earned his M.D. in 1982. During his studies at the University of Texas, Youngblood traveled to Egypt, where he studied at the Cairo University Medical School.

After earning his M.D., Youngblood moved to New York City, where he held a surgical internship with Columbia University for a year; in 1983, he moved and began his two-year residency in emergency medicine at the Emory University School of Medicine in Atlanta, Georgia. After completing his residency, Youngblood returned to Texas, taking a position as an emergency physician at the Medical Center of Plano, a Dallas suburb. Youngblood remained in Plano until he left the medical profession in 1997, at which time he co-founded and became the managing partner of Pharos Capital Group, LLC., a private equity firm that invests in technology, business services, and health care companies, and manages more than $200 million in investments.

In 1993, Youngblood was appointed by President Clinton to serve on the board of directors of the United States Enrichment Corporation, a government-owned corporation that provided nuclear fuel to countries hoping to utilize nuclear power. Youngblood remained at the United States Enrichment Corporation until 1998, at one point traveling with a delegation to South Africa, where he met with both F.W. DeKlerk and Nelson Mandela. Youngblood's time in South Africa prompted him to write an essay entitled From Sit-In to Soweto, detailing his experiences as a young man protesting South African policies dealing with working with the country. During his tenure with the Clinton Administration, Youngblood was also a part of First Lady Hillary Clinton’s Health Care Task Force.

Youngblood served on the board of directors of numerous corporations and organizations, including the Teacher Retirement System of the State of Texas, an $85 billion pension fund, and the boards of AMR Investments; Starwood Hotels & Lodging, Incorporated; Burger King, Incorporated; and The Gap, Incorporated. Youngblood also served as a member of the Council on Foreign Relations.

See how Dr. Kneeland Youngblood is related to other HistoryMakers
Donate Now
Click Here To Explore The Archive Today!