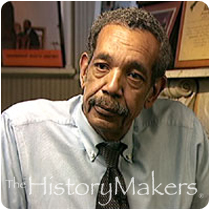 See how Dr. Keiffer Mitchell is related to other HistoryMakers
Donate Now

Born in Baltimore on November 4, 1941, Dr. Keiffer J. Mitchell, Sr. was born into a family that was well known and respected in Baltimore's African American community. The grandson of Lillie Jackson, one of Baltimore's prominent leaders in the 1930s and 1940s, Mitchell had an equally impressive parentage. His father, Clarence Mitchell, became known as the "101st senator" for his political influence as a civil rights adviser to President Lyndon B. Johnson. Mitchell's mother, Juanita Jackson Mitchell, was an NAACP activist. In childhood, Mitchell walked picket lines with his father during the civil rights movement.

Mitchell graduated from Baltimore City College High School in 1959. He attended Morgan State University before transferring to Lincoln State College, where he received his B.A. in 1963. As a child, Mitchell had been an artist, but in high school he developed an interest in the sciences. His fascination with the sciences led him to medicine and Meharry Medical College in Nashville, Tennessee, where he earned his M.D. He went on to practice medicine, specializing as a gastrointestinal surgeon.

With activism in his blood, Mitchell added his own chapter to his family's proud history by fighting to ensure equal access to healthcare to Baltimore's African American community. He made this his lifelong passion. His son, Keiffer Mitchell, Jr., a teacher and city councilman in Baltimore, entered the political arena as a rising star in the state Democratic Party.

Mitchell resided in Baltimore until he passed away on August 18, 2015.

See how Dr. Keiffer Mitchell is related to other HistoryMakers
Donate Now
Click Here To Explore The Archive Today!