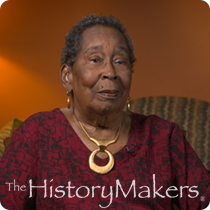 Psychiatrist Dr. June Jackson Christmas was born on June 7, 1924 in Cambridge, Massachusetts to Mortimer Jackson and Lillian Jackson. She earned her B.S. degree in zoology from Vassar College in 1945, and her M.D. degree in psychiatry from the Boston University School of Medicine in 1949. Christmas completed her psychiatric residencies at Bellevue Hospital, and Queens General Hospital. She also received a certificate in psychoanalysis from the William Alanson White Institute.

In addition to opening her own private practice, Christmas worked as a psychiatrist for the Riverdale Children’s Association in New York City from 1953 to 1965. In 1962, she became chief of the group therapy program at the Harlem Hospital Center and founded the Harlem Hospital Rehabilitation Center in 1964. From 1964 to 1972, she served as principal investigator on research projects for the National Institute of Mental Health; and in 1971, began teaching at Columbia University's College of Physicians and Surgeons. In 1972, Christmas was appointed deputy chief of the New York City Department of Mental Health and Retardation Services by Mayor John Lindsay. She was re-appointed in 1973 by Mayor Abraham D. Beame and again in 1978 by Mayor Ed Koch. In 1976, Christmas headed the Department of Health, Education and Welfare transition team for then president-elect Jimmy Carter. In 1980, Christmas began teaching behavioral science at the C.U.N.Y. Medical School. While teaching at C.U.N.Y. she co-founded the think tank Urban Issues Group. Christmas also served as a member of New York Governor Mario Cuomo's Advisory Committee on Black Affairs in 1986, and as chair of New York City Mayor David Dinkins' Advisory Council on Child Health in New York City from 1990 to 1994.

Christmas was a member of Vassar College's Board of Trustees from 1978 to 1989. She was the first African American woman president of the American Public Health Association in 1980. In 2003, she became a member of the board for the Jackie Robinson Foundation. Christmas also received numerous awards for her work, including the 1974 Human Services Award from the Mental Health Association of New York and Bronx Cities, as well as the 1976 Award for Excellence in the Field of Domestic Health from the American Public Health Association. She was named Vassar College’s President's 1988 Distinguished Visitor, and received the Lifetime Achievement Award from the National Medical Fellowships in 1999.

Dr. June Jackson Christmas was interviewed by The HistoryMakers on January 19, 2017 and February 3, 2017.