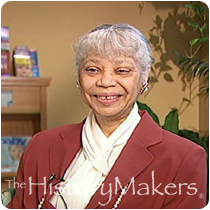 See how Dr. Juel Pate Borders is related to other HistoryMakers
Donate Now

Rev. and Dr. Juel Pate Borders was born in Chicago, Illinois, and grew up in Atlanta, Georgia. Her father, the late civil rights leader Reverend William Holmes Borders, was the pastor of Wheat Street Baptist Church in Atlanta for more than fifty years. Borders lived just a few blocks away from young Martin Luther King, Jr., who would later pattern his preaching after her father’s eloquent style.

Borders attended the Palmer Memorial Institute, a college preparatory school in Sedalia, North Carolina, established by nationally acclaimed African American educator Charlotte Hawkins Brown. In 1954, Borders earned her B.A. degree from Spelman College in Atlanta. She went on to the Medical College of Pennsylvania earning her M.D. degree in 1960, with a specialty in obstetrics and gynecology. Borders did her residency at the Albert Einstein Medical Center in Philadelphia, Pennsylvania, and opened her own practice in Atlanta in 1965.

Borders has maintained her family tradition of social activism. In the early 1970s, for example, she served on a court appointed biracial committee charged with overseeing the process of desegregating the Atlanta Public School System. Decades later, she pursued a second career when she followed her father’s footsteps into the ministry. She earned her Masters of Divinity degree in 1992, from the Emory University Candler School of Theology. She is the assistant to the pastor for the institutional ministries at Wheat Street Baptist Church. In the 1980s, the prominent physician had a building erected to house her practice. She is a member of the Women’s Health Care Alliance, a non-profit, independent practice association composed of physicians, specializing in obstetrics & gynecology, perinatology, gynecological oncology, and reproductive endocrinology.

Borders is a widow and the mother of two children, Rev. Theodore Benson, a minister in Philadelphia, and Dr. Elinor Benson, an Atlanta obstetrician and gynecologist.

Juel Pate Borders was interviewed by The HistoryMakers on March 25, 2004.

See how Dr. Juel Pate Borders is related to other HistoryMakers
Donate Now
Click Here To Explore The Archive Today!