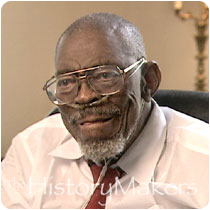 See how Dr. John W. Coleman, Sr. is related to other HistoryMakers

Dr. John William Coleman was born on December 18, 1920, in Glendale, South Carolina. Coleman was the oldest boy of four children born to Birdie O'Neal and John Henry Coleman. Coleman always wanted to be a doctor and grew up to become a radiologist who helped change Chicago's hospitals.

Cummings Street High School in Spartanburg, South Carolina, which Coleman attended, was located behind an incinerator. In spite of the unpleasant environment, Coleman excelled and graduated second in his class in 1937. He was awarded a scholarship to Johnson C. Smith University in Charlotte, North Carolina, and earned a bachelor's degree at the age of twenty. Having learned the plastering trade from his father, Coleman decided to work as a plasterer for a year in order to save money for medical school. He was accepted to Meharry Medical School, but on December 7, 1941, the United States entered World War II. Coleman received notification that he would be drafted. However, the local draft board president was a physician, and when Coleman showed him his acceptance letter, the physician tore up the induction notice and told him to go to school.

Coleman enrolled in Meharry, but in 1943, he and his classmates were inducted into the U.S. Army. Declared part of the Army Specialized Training Program, Coleman and his classmates were sent back to school. By the time Coleman graduated, the war had ended. Coleman was commissioned a second lieutenant in the Army Reserve - a commission he resigned at the request of the military. Coleman moved to Chicago, Illinois, and interned at Provident Hospital. The next year, he became a resident in radiology and was certified in both diagnostic and therapeutic radiology and served as an attending physician part time at Provident while beginning a private practice. Then, in 1952, Coleman was called to take part in the Korean War. Reenlisting and serving as an Air Force captain, Coleman worked in an Air Force hospital in upstate New York for two years.

In 1955, Coleman moved back to Chicago and opened a practice on the city's South Side. In 1958, he began working part time at the West Side Veteran's Administration Hospital. Coleman was instrumental in a 1961 lawsuit resulting in integrated hospitals in Chicago. He continued to work with veterans until his 1988 retirement.

See how Dr. John W. Coleman, Sr. is related to other HistoryMakers
Click Here To Explore The Archive Today!