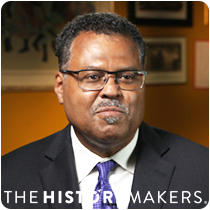 Psychiatrist and professor Dr. John E. Franklin, Jr. was born on November 7, 1954 in St. Louis, Missouri to Arlena Scott Franklin and Dr. John E. Franklin, Sr. His family moved to Detroit, Michigan in the late 1950s and he graduated from the Interlochen Arts Academy in 1972. He studied theater at New York University School of the Arts before obtaining his B.S. degree in zoology from Michigan State University in 1976. In 1980, Franklin received his M.D. degree from the University of Michigan Medical School. He later earned an M.Sc. degree from the Harvard University School of Public Health in 1999 and an M.A. degree from Northwestern University in 2014.

Franklin began his career as an instructor in psychiatry at New York Hospital Cornell University Medical College in 1984. At the affiliated Westchester Division facility in White Plains, New York, he served as the attending physician in the substance abuse and eating disorder units. In 1986, Franklin moved to Newark, New Jersey to join the faculty of the University of Medicine and Dentistry of New Jersey - New Jersey Medical School. He worked with substance abuse patients at two Newark area institutions, the Institute for Counseling and Training and St. Barnabas Hospital, and held consultancies with the State of New Jersey and the U.S. Department of Veterans Affairs. In 1993, Franklin began a long-term career at Northwestern University and achieved the rank of full professor. He held faculty appointments in the departments of psychiatry, surgery and medical education/medical humanities and bioethics. Franklin provided psychiatric services for medical/ surgical inpatients, directed the Addiction Division and fellowship, had a general psychiatric practice and was the transplant psychiatrist for the Kovler Organ Transplantation Center. In 2002, Franklin was named associate dean for minority and cultural affairs at the Northwestern University Feinberg School of Medicine, and in 2016, he became associate dean for diversity, inclusion and student support.

In 1985, Franklin helped found the American Academy of Addiction Psychiatry, and he has co-authored numerous papers, chapters, books in the areas of addiction, organ transplantation and health disparities. Franklin served on national committees for the National Institute for Drug Abuse, Institute of Medicine and Federal Drug Administration. He has served on community boards, including Lakefront Supportive Housing, Community Counseling Centers of Chicago, Westinghouse Scholars and did psychiatric disability examinations for the State of Illinois for 20 plus years. Franklin is a 2002 Leadership Greater Chicago fellow. He has served as a member of numerous professional organizations including the American Psychiatric Association, the National Medical Association and Black Psychiatrists of America. In 2017, he was elected into the Alpha Omega Alpha (AOA) honors medical society. Franklin has been recognized for his teaching contributions with awards and commitment to issues of diversity; in 2016, the Marco Ellis Legacy Award was renamed the John E. Franklin, MD Commitment to Diversity Award in his honor.

Franklin and his wife, Terri West Franklin, have three children.