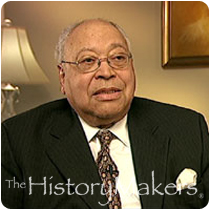 Dr. John F. J. Clark, Jr. was born in West Virginia on December 8, 1922. After attending Charleston public schools, he enrolled in West Virginia State College in 1939, but left for Ohio State University in 1941 and earned his A.B. degree in 1943. Clark then entered Howard University School of Medicine, earning his M.D. degree in 1946. He continued his training at Howard University Hospital as a resident in obstetrics and gynecology, finishing in 1951.

Upon the completion of his residency, Clark began working at Howard as a clinical assistant, and by 1955, he was an instructor in obstetrics and gynecology. A year later, he was named assistant professor, and in 1957, he began consulting at the District of Columbia Hospital, as well. That same year, he became chairman of the Department of Obstetrics and Gynecology, a position he retained until 1976. Clark was named a full professor in 1964, and continued consulting at area hospitals, including Norfolk Community and Sibley Memorial. In 1972, Clark wrote “The Weekly Health Column,” which was distributed to thirty-five African American newspapers across the country on the health concerns of women and children. Clark worked at Howard University until 1996 as a professor, and remained there as a consultant until his death.

Active in a variety of other areas, both civic and professional, Clark served as a consultant to the Food and Drug Administration, the Department of Defense and the Medical Society of the District of Columbia. He also headed up a March of Dimes campaign and was an activist in the integration of hospitals.

Clark held the distinction of training more qualified black physicians in obstetrics and gynecology than anyone in the world and was honored numerous times. In 1978, both the College of Medicine and the Hospital (Howard University) honored him with the Kaiser-Permanente Award for Excellence in Teaching, and the National Medical Association presented him with an award for being a Distinguished Physician, Teacher and Scholar. The Howard University College of Medicine endowed the John F.J. Clark, M.D. Chair in Obstetrics and Gynecology on his behalf in 1994, and President Bill Clinton praised him for the work he did through the generations.