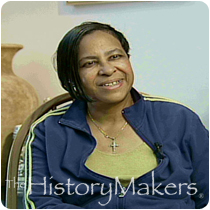 Favorite Color:
Blue
Favorite Food:
Fried Fish, Fried Chicken
Favorite Time of Year:
Fall
Favorite Quote:
Acknowledge God In All Thy Ways And He Will Lead Thy Paths. Lean Not On Your Own Understanding.

Favorite Color:
Blue
Favorite Food:
Fried Fish, Fried Chicken
Favorite Time of Year:
Fall
Favorite Quote:
Acknowledge God In All Thy Ways And He Will Lead Thy Paths. Lean Not On Your Own Understanding.

See how Dr. Janice Hutchinson is related to other HistoryMakers
Donate Now

Pediatrician and child psychiatrist Dr. Janice Gertrude Hutchinson was born on September 22, 1947, in Chicago, Illinois to Dorothy and James Hutchinson. She and her twin brother Jamal J. Hutchinson began their education at the Catholic school, Holy Name of Mary. They then attended Morgan Park High School, graduating in 1965. Hutchinson enrolled at Stanford University, where she took pre-medical courses but majored in sociology. After receiving her B.A. degree in 1969, she attended the University of Cincinnati Medical School, earning her M.D. degree in 1973. During her final year of medical school, she worked at the John F. Kennedy Hospital in Monrovia, Liberia. She completed her residency in pediatrics at Montefiore and Rush University Medical Centers before returning to school to earn her M.P.H. degree from the University of Illinois.

In the early 1980s, Hutchinson joined the Rush University Medical School as adjunct faculty. Disinterested in private practice, she joined the U.S. Public Health Service Commissioned Corps before taking a leave of absence to work in a refugee camp outside of Bangkok, Thailand. When she returned to the United States, she completed a child and adolescent fellowship at the Institute for Juvenile Research (IJR) at the University of Illinois. At the same time, she served as a public health doctor at the American Medical Association (AMA) where she worked on issues of teen pregnancy and child abuse. When the HIV antibody was identified in 1982, she was concerned about the devastating effect of the disease on children and helped to organize the AMA's first major HIV conference in the mid-1980s.

After Hutchinson completed her residency in adult psychiatry at the University of Cincinnati and at St. Elizabeths Hospital in Washington, D.C. , she was selected as the medical director and administrator for Children's Mental Health Services in Washington D.C.'s Department of Mental Health. Hutchinson currently works at Howard University where she is an associate professor of psychiatry and pediatrics and the residency training director in psychiatry for the Department of Psychiatry and Behavioral Sciences. Board certified in pediatrics, adult and child psychiatry, Hutchinson has taught and written about child abuse, domestic violence, teen pregnancy, HIV/AIDS, children’s impulsivity and aggression, incarcerated juveniles and mental illness, the use of antidepressants with children and youth suicide. In 2005, she received the American Psychiatric Association’s Irma Bland Excellence in Teaching Award. Hutchinson co-authored Losing Control: Loving a Black Child with Bipolar Disorder with Cassandra Joubert and Linda Thompson Adams in 2007. Hutchinson is a member at large of the Washington Psychiatric Society.

Dr. Janice Hutchinson was interviewed by The HistoryMakers on July 26, 2008.

See how Dr. Janice Hutchinson is related to other HistoryMakers
Donate Now
Click Here To Explore The Archive Today!