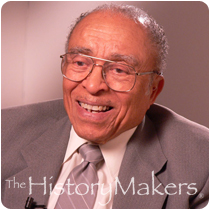 See how Dr. James Williams is related to other HistoryMakers

As a military officer and physician, Dr. James B. Williams has spent his entire career in public service. Co-founding the Williams Medical Clinic in Chicago with his two brothers, Dr. Jasper F. Williams and Dr. Charles L. Williams, he was also part of a handful of dedicated young men who enlisted and became America’s first black airmen, known as the Tuskegee Airmen.

In 1942, with a pre-medicine background, Williams was drafted into the military and given a position with the medical corps at Camp Pickett, Virginia, and was chosen to attend Medical Administrative Officers Candidate School. Wanting to become a pilot, however, he asked to transfer to the Army Air Corps. He was subsequently appointed an aviation cadet and sent to Boca Raton Club, Florida, for basic training. From there, he went to Yale University for technical training, where he was commissioned as a second lieutenant in the Air Corps. As a member of the Tuskegee Airmen, Williams served as an Engineering Officer in the post war 99th Fighter Squadron. Also during his time in the service, Williams was among the 101 black officers who attempted to integrate a segregated officers’ club in what became known as the Freeman Field Mutiny.

Williams, a native of Las Cruces, New Mexico, was born on May 28, 1919 to Clara Belle Williams and Jasper B. Williams and was educated in a segregated grade and high school. He earned his B.S. degree in chemistry from New Mexico State University after finishing his military service, and with dreams of becoming a physician, he earned his M.D. degree from Creighton University School of Medicine. There, he met his future wife, Willeen Brown. Williams continued his medical education and was accepted into Creighton’s surgical residency program, earning his M.S. degree in surgery in 1956. With his various medical experiences, he and his brothers established the Williams Clinic on Chicago’s South Side. At its peak, there were more than twenty-eight doctors practicing at the clinic. Williams also worked at Chicago’s St. Bernard’s Hospital in 1957 as its first African American physician, becoming the hospital’s chief of surgery from 1971 to 1972. Williams combined his dedication to progress and medical prowess by meeting with President John F. Kennedy in 1963, as a member of a National Medical Association delegation to advance an amendment to the Hill-Burton Act that would prevent discrimination in hospitals built with federal assistance. Williams also served as physician to Dr. Martin Luther King, Jr., when the civil rights leader lived in Chicago.

Williams and his wife lived in Las Cruces, New Mexico. The couple had two children: a daughter, Brenda Payton Jones, a former columnist for the Oakland Tribune, and a son, Dr. James B. Williams II, colorectal surgeon in Albuquerque, New Mexico.

See how Dr. James Williams is related to other HistoryMakers
Click Here To Explore The Archive Today!