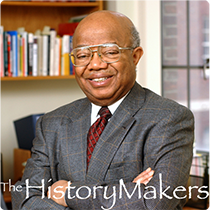 See how Dr. James Comer is related to other HistoryMakers

Dr. James P. Comer, founder and chairman of the School Development Program at the Yale University School of Medicine’s Child Study Center, was born on September 25, 1934, in East Chicago, Indiana. After earning his A.B. degree from Indiana University, Comer went on to earn his M.D. from Howard University College of Medicine in 1960, and his M.P.H. from the University of Michigan School of Public Health in 1964.

After completing his M.P.H., Comer completed his training at the Yale School of Medicine, the Yale Child Study Center, and the Hillcrest Children’s Center in Washington, D.C. Comer was also enlisted in the military, completing his service in 1968 at the rank of Surgeon, Lt. Colonel, in the United States Public Health Service.

After 1976, Comer became the Maurice Falk Professor of Child Psychiatry at the Yale School of Medicine; in this role, he developed the Comer Process, which was a system of education that focused on child development in inner-city schools. Comer's process has been utilized in more than six hundred schools in eighty-two school districts across twenty-six states. In 1968, Comer founded the Comer School Development Program to promote the usage of his process in schools across the nation; to achieve this aim, an emphasis was placed on collaboration between parents, teachers, and the surrounding community to improve the lives of young students and, in turn, their prospects for succeeding on the path to higher education.

In addition to lecturing and consulting widely across the United States at colleges and universities, medical schools, scientific associations, and public school districts, Comer lectured, observed, and discussed child care, school conditions, and reform around the world, in places such as London, Paris, Tokyo, Dakar, Senegal, and Sydney.

A prolific writer, Comer has authored ten books, including: Beyond Black and White (1972); Black Child Care (with Dr. Alvin Poussaint, 1975); Raising Black Children (1992); School Power: Implications of an Intervention Project (1980); and most recently, Leave No Child Behind: Preparing Today’s Youth for Tomorrow’s World (2004). Between 1978 and 1994, Comer wrote more than one hundred and fifty articles for Parent’s Magazine and more than three hundred syndicated articles on children’s health and development and race relations.

See how Dr. James Comer is related to other HistoryMakers
Click Here To Explore The Archive Today!