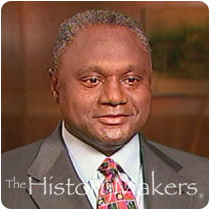 See how Dr. Henry Lewis is related to other HistoryMakers

Born on January 22, 1950 in Tallahassee, Florida, Dr. Henry Lewis III received his B.S. degree in pharmacy from Florida A&M University; his Doctor of Pharmacy degree from Mercer University; and completed his post-doctoral training at the Institute for Educational Management at Harvard University.

Lewis has served as a professor, dean and Interim President of the Florida A&M University College of Pharmacy and Pharmaceutical Sciences. Lewis has also served as president of the Minority Health Professions Foundation and its sister agency, the Association of Minority Health Professions Schools, which, under his leadership, secured a combined sum of over $100 million in support of programs, research and activities to improve the quality and availability of health care to minority and underserved communities. Lewis also played an instrumental role as president of the National Pharmaceutical Association and the Care-Net Health System for the uninsured in Leon County. Under his direction, FAMU has opened a pharmacy for medically deprived patients at the Bond Community Clinic.

Besides serving on numerous local and national boards, Lewis has testified before many Congressional subcommittees on health, research and educational funding, and has provided service to such organizations as the United Way, Habitat for Humanity, the National Urban League, Big Bend Hospice and the American Cancer Society. In 1986, he made history by becoming the first African American elected to the Leon County Board of County Commissioners. The Student National Pharmaceutical Association recognized Lewis as a Teacher of the Year. He married his wife, Dr. Marisa Lewis, also a pharmacist, in 1990.

See how Dr. Henry Lewis is related to other HistoryMakers
Click Here To Explore The Archive Today!