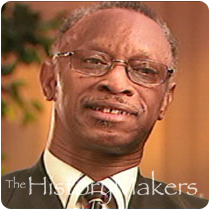 See how Dr. Henry L. Cook is related to other HistoryMakers

Highly regarded as a businessman and community leader, dentist Dr. Henry Lee Cook, Sr. was born on September 7, 1939 in Macon, Georgia. He earned a B. S. degree in Biology from Tuskegee University in 1962.

Cook served in the United States Air Force as a First Lieutenant from 1962 to 1965. He was married, in 1964, to the former Mamie Richmond and they have been married for the past 38 years. In 1965, Cook traveled to Nashville, Tennessee and earned a D. D. S. from Meharry Medical College in 1969. Setting up private practice as a dentist in Columbus, Georgia, Cook practiced dentistry successfully for 32 years. In 1976, he built the Martin Luther King, Jr. Shopping Center in Columbus' black community, which included an ultra-modern dental office.

Throughout his career, Cook has been involved in a variety of professional and civic organizations. His affiliations include: the American College of Dentistry, the Pierre Fauchard Academy, the National Dental Association, the Georgia Dental Association, the Western District Dental Society, and the State Health Strategies Council. He is the former chairman of the board of the Columbus Technical Foundation, the Columbus Technical Institute and the A. J. McClung Y. M. C. A. Cook is currently chairman of the Minority Assistance Corporation, the Columbus Business Development Center and the Supervisory Board of Personal Review. Among his many awards, Cook is the recipient of the Georgia Dental Society's highest honor, the Dr. J. E. Carter Award and the Civil Rights Award from the National Dental Association. Both of his children, Henry and Cathy are dentists.

See how Dr. Henry L. Cook is related to other HistoryMakers
Click Here To Explore The Archive Today!