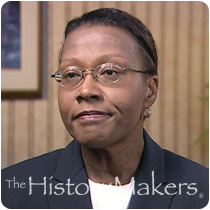 See how Dr. Heloise Westbrook is related to other HistoryMakers

Anesthesiologist Heloise Demoin Westbrook was born on July 1, 1954 in Buffalo, New York. Her parents, Mary Lue and Quinton Westbrook, moved from Tennessee and raised six children in the colder climate of upstate New York. Westbrook's career has been dedicated to pain management.

After graduating in 1972 from Mount Saint Joseph's Academy in her hometown of Buffalo, Westbrook attended Boston College in Chestnut Hill, Massachusetts. She earned a bachelor's degree in biology in 1976 before moving to Carbondale, Illinois to study in the medical education preparatory program of Southern Illinois University. In 1984, with an M.S. in health services management, Westbrook enrolled in the university's doctoral program, focusing on community and public health education, and earning a Ph.D. in 1987. Studying anesthesiology and patient monitoring, Westbrook continued her education at Emory University in Atlanta, Georgia in 1987. Completing her second master's degree and certification as a physician assistant in 1989, Westbrook was hired by the Dekalb-Fulton County Hospital Authority and the Emory Clinic as an anesthetist. In 1990, she began working towards an M.D. at Finch University of Health Sciences/The Chicago Medical School. She served as a teaching assistant in the anatomy and neuroscience departments before becoming a Doctor of Medicine in 1994.

Westbrook served as an intern in transitional medicine at the Medical Center in Columbus, Georgia and as an anesthesiology resident at the University of Alabama-Birmingham and the University of Maryland-Baltimore. She stayed at the University of Maryland as an obstetrical anesthesiology fellow and clinic instructor until 1999, when the Pain Management Center of Dartmouth-Hitchcock Medical Center in Lebanon, New Hampshire offered her a position as a fellow and clinic instructor there. Finally, in 2001, Westbrook became a staff anesthesiologist at Avera St. Luke's Hospital in Aberdeen, South Dakota as well as the director of the Pain Management Center. Westbrook serves as a pilot in the United States Air Force Reserves.

See how Dr. Heloise Westbrook is related to other HistoryMakers
Click Here To Explore The Archive Today!