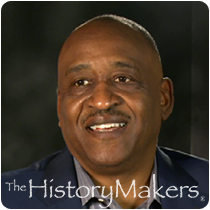 See how Dr. Glenn W. Cherry is related to other HistoryMakers

Media company executive and veterinarian Glenn W. Cherry was born in Daytona Beach, Florida to Julia T. Cherry and Charles W. Cherry, Sr. His father founded the Florida Courier and Daytona Times, for which Cherry began selling advertising for in 1978. Cherry earned his B.S. degree in biology from Morehouse College in 1980 and his D.V.M. degree from Tuskegee University in 1984. He then served as a United States Air Force Captain from 1984 to 1988, as Chief of Public Health Service in the Netherlands and Turkey. Cherry was honorably discharged from reserve duty in 1991.

After his military service, Cherry worked in veterinary medicine as confidential assistant to the administrator of the Animal and Plant Health Inspection Service at the U.S. Department of Agriculture, state veterinarian for the Maryland Racing Commission, supervisory veterinarian at the National Institutes of Health, and as biologist at the U.S. Consumer Product Safety Commission. From 1994 to 1998, Cherry worked in the Clinton Administration in the White House Office of Presidential Personnel as an executive search manager. Cherry has also served as chairman and chief executive officer of Global Health Professionals, Inc., a Florida-based non-profit organization.

In 1989, Cherry, along with his father and brother, purchased the WPUL-AM 1590 radio station in Daytona Beach, Florida. Cherry went on to purchase WCSZ-AM in Greenville-Spartanburg, South Carolina in 1996, and then WTMP-AM 1150 in Tampa, Florida in 1997, where he served as general manager until 2007.

In 2000, Cherry and his brother founded Tama Broadcasting, Inc., Florida’s largest privately held African American media group, and he served as its president and chief executive officer as well as a board director. Under Cherry’s leadership, Tama Broadcasting acquired Dade City, Florida’s WMGG-FM 96.1 in 2002 and changed its call letters to WTMP-FM. The company also expanded into the Jacksonville, Florida market with WHJX-FM, WSJF-FM, WJSJ-FM, and WOKF-FM. In 2004, acquisitions were made in the Savannah, Georgia market with WSSJ-FM, WMZD-FM, and WSGA-FM.

Cherry is married to Dr. Valerie Rawls Cherry. They have one son, Jamal.

Glenn Cherry was interviewed by The HistoryMakers on September 12, 2014.

See how Dr. Glenn W. Cherry is related to other HistoryMakers
Click Here To Explore The Archive Today!