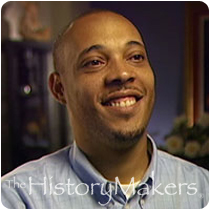 See how Dr. George Jenkins is related to other HistoryMakers

Growing up in a rough neighborhood in Newark, New Jersey, Dr. George Jenkins beat the odds and followed a dream. Born on February 6, 1973, he attended University High, where his life changed. At age thirteen, while at a dentist's office, Jenkins became curious about the process, and the dentist proceeded to tell Jenkins about his different tools and teach him about teeth. From that moment, he wanted to be a dentist.

In high school, Jenkins befriended Sampson Davis and Rameck Hunt, two equally bright individuals living in the same rough area. Jenkins had learned about a program at Seton Hall University that paid for minority students to attend if they enrolled in a pre-medicine or pre-dental program. Jenkins set about convincing his friends to apply. All three were accepted, with Davis and Hunt pursuing medicine. The three spent the next four years studying together to keep their grades and spirits up. After graduation, the three were split, with Davis and Hunt heading to medical school, and Jenkins remaining in Newark to attend the University of Medicine and Dentistry in New Jersey. They remained in close contact, visiting one another each week to study and boost one another's morale. In 1999, the three young men became doctors, and the following day, a local newspaper ran a front-page story about them with the headline, "Start of Something Big." Today, Jenkins is a faculty member of community health at the University of Medicine and Dentistry.

The Three Doctors, as they have become known, have written a book about their experiences, The Pact: Three Young Men Make A Promise and Fulfill A Dream, which was a New York Times bestseller. They have also established a nonprofit organization, the Three Doctors Foundation, to provide scholarships to inner-city youth and they tour the country speaking and inspiring students to follow in their footsteps. In 2000, the three were honored with an Essence Award for their community service. They have plans to begin appearing in music videos and on billboards with the hopes of giving disadvantaged youth alternate role models.

See how Dr. George Jenkins is related to other HistoryMakers
Click Here To Explore The Archive Today!