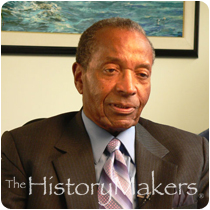 See how Dr. Fred Parrott is related to other HistoryMakers
Donate Now

Foundation executive and gynecologist Dr. Fred D. Parrott was born in Houston, Texas on December 22, 1934. After graduating from Jack Yates High School in 1944, Parrott enrolled at Howard University where he earned his B.S. degree in psychology in 1947. Following the completion of his undergraduate study, Parrott earned his M.S. degree in microbiology at the University of California, Los Angeles. During the early 1950s and during the Korean War, Parrott entered the Medical Service Corps of the United States Army , where he was stationed in Tokyo, Japan for two years while he worked as a bacteriologist. He also opened a tailor shop in Tokyo, fitting servicemen with Hong Kong made shirts. Parrott’s first employment in the medical field was working as the territory manager for Wyeth Pharmaceutical. In 1958, Parrott graduated from Meharry Medical College and became a fellow of the University of Minnesota Medical Center Department of Obstetrics and Gynecology. Parrott moved to Los Angeles, California upon graduating and did an internship at the Los Angeles County Hospital before becoming a fellow at the University of Minnesota. After completing his fellowship, Parrott returned to Los Angles and began private practice.

In 1986, Parrott founded the "Real Men Cook" Foundation, whose mission was to increase the number of minority health care providers by awarding scholarships to students attending Historically Black College and University medical schools in the United States. In 1994, after being diagnosed with prostate cancer, Parrott founded the Real Men Cook Foundation Center for Early Detection of Prostate Cancer. The Foundation’s goals expanded to increasing awareness and education of prostate cancer and prevention in inner city communities.

Dr. Fred D. Parrott was interviewed by The HistoryMakers on July 7, 2007.

See how Dr. Fred Parrott is related to other HistoryMakers
Donate Now
Click Here To Explore The Archive Today!