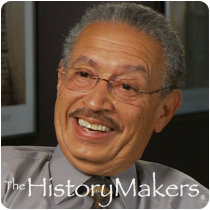 See how Dr. Floyd Malveaux is related to other HistoryMakers

Allergist and immunologist, physician and academic administrator Floyd J. Malveaux was born on January 11, 1940 in Opelousas, Louisiana to Inez Lemelle and Delton Malveaux. He received his B.S. degree from Creighton University in 1961 and his M.S. degree from Loyola University, New Orleans in 1964, both in biological sciences. Malveaux then attended Michigan State University where he obtained his Ph.D. degree in microbiology and public health in 1968. He later received his M.D. degree from Howard University College of Medicine in 1974.

Malveaux served as associate professor of microbiology at Howard University College of Medicine (HUCM), coordinator of the Science Program from District of Columbia Public Schools, and coordinator of microbiology for Howard University College of Dentistry before rejoining the faculty of Howard University College of Medicine in 1978 as an associate professor of medicine. At HUCM, Malveaux created a training program for allergists/immunologists. In 1986, Malveaux was invited to join the faculty at Johns Hopkins University and also founded the Urban Asthma and Allergy Center in Baltimore, Maryland. In 1989, he returned to HUCM as chair of the Microbiology Department. His work led to the Community Outreach for Asthma Care, a new treatment program at HUCM. In 1995, Malveaux became the dean of HUCM, forcing him to give up his clinical practice. In 1996, Malveaux was named interim vice president for health affairs at HUCM and served as the principal investigator for a grant from the National Institutes of Health (NIH) for HUCM to establish a major Clinical Research Center. He co-authored a study in 1997 that demonstrated a strong correlation between cockroaches and an increase of asthma in inner city children. Malveaux retired from HUCM in 2005 and joined the Merck Childhood Asthma Network, Inc. as its head.

Malveaux has served as a member of many professional organizations including on the board of directors for the American Lung Association, the National Allergy and Infectious Diseases Advisory Council, and the American Academy of Allergy. He worked extensively with the National Medical Association holding a number of positions including member of the board of trustees and first chair of the Allergy/Immunology Section. Malveaux was a member of the Alpha Omega Honor Medical Society.

Malveaux and his wife have four adult children: Suzette, Suzanne, Courtney and Gregory.

Dr. Floyd Malveaux was interviewed by The HistoryMakers on March 6, 2012.

See how Dr. Floyd Malveaux is related to other HistoryMakers
Click Here To Explore The Archive Today!