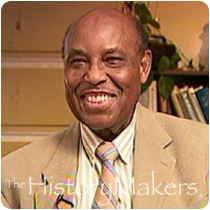 See how Dr. Ebenezer Bush is related to other HistoryMakers

Born in Shreveport, Louisiana, on March 20, 1920, Dr. Ebenezer Bush attended segregated schools while growing up. Graduating from Shreveport's Central Colored High School, he was admitted to the Tuskegee Institute as a work student, taking classes at night and working during the day.

After graduating from Tuskegee, Bush taught agriculture at the high school level until the outbreak of World War II. In the Army for three years, Bush served a tour of duty in the Pacific theater. After being discharged, Bush enrolled in Howard University's School of Dentistry, graduating in 1952. From Howard, Bush moved to Long Beach, California, where he became the first African American to establish a dental practice.

Bush was a member of numerous professional organizations, including a life member of the American Dental Association. He received numerous awards. Family Service of Long Beach presented him with the Family Life Award, he received the key to the city of Long Beach, and he was honored by both Howard University and the Tuskegee Institute as a distinguished alumnus. He was also active with civic organizations, including founding and serving as the first president of the Long Beach Community Credit Union and serving on the board of the Long Beach City College Foundation.

Bush and his wife, Wynona, had two sons, both of whom are doctors.

See how Dr. Ebenezer Bush is related to other HistoryMakers
Click Here To Explore The Archive Today!